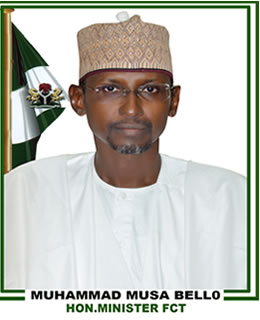 The Federal Capital Territory Administration is working to introduce regulations that would ensure that all future public buildings plans provide for people with disability before their approval.

The FCT Minister, Malam Muhammad Musa Bello made this disclosure Monday when he received a delegation from the Kpakpando Foundation that paid him a courtesy call in his office, at Garki 1 District Abuja.

The Minister revealed that the FCT Administration also intends to seek ways to amend existing building structures to make them navigable by the physically challenged and other vulnerable citizens, pointing out that a modification of the building housing the Minister’s office was carried out last year to provide for a ramp and conference room on the ground floor for meetings with the persons with disability.

Malam Bello also revealed that plans are ongoing to create informal markets in the Federal Capital City where persons with disability, less privileged people and other interested residents could own stalls, while expressing his determination to provide economic opportunities for the vulnerable members of the FCT society.

His words: “I can easily identify with the plight of the physically challenged, having had a sister that was afflicted with polio and am conversant with their difficulties.”

“As Nigerians, we feel very proud that your foundation has been recognized and invited the FCTA to be part of the celebration of the United Nations 10th Anniversary on Persons with Disability and we appreciate your agreeing to take somebody from among our physically challenged brothers and sisters here; I assure you that the person’s trip will be funded by the FCT Administration.”

Earlier in his address, the Chairman of Kpakpando Foundation, Senator Osita Izunaso, said that the leadership of the foundation was in the FCTA to explore areas of collaboration towards the establishment of a database for persons with disability in the Federal Capital Territory, as well as ensure that all public buildings provide access for the physically challenged.

The APC Chieftain disclosed that part of their plan is also to partner with the Administration in the area of setting up schools for persons with disability in the Federal Capital Territory.

He said: “We are here today to also inform you that we want to establish a very strong presence in the Federal Capital Territory and we have also been invited by the United Nations to attend the 10th year United Nations Convention on Persons with disability holding in June.

In his presentation at the occasion, a visually impaired member of the entourage, Mr. Danjuma Attah, who became blind at the age of 13, commended the FCT Minister for his concern for the vulnerable, disclosing how the Minister changed his fortunes by signing his license as a tour operator for the Umrah and Hajj, at the time he (the Minister) served as the Chairman of the National Hajj Commission of Nigeria (NAHCON).

Mr. Attah, however, sought for the support of the FCT Administration through the provision of a plot of land for the construction of a special centre for the blind. The centre, Mr. Attah revealed, would be equipped with fitness and medical facilities suitable for the blind and the visually impaired.