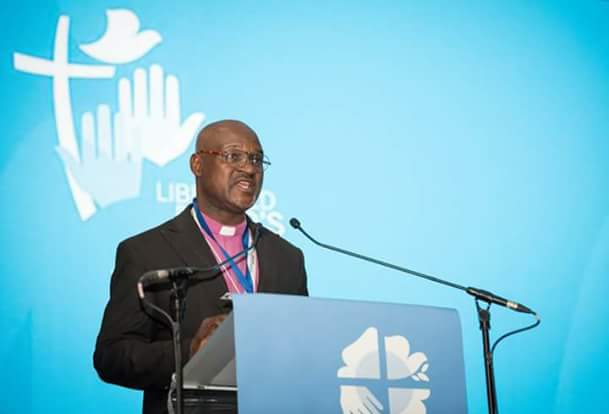 Rev. Dr Musa Panti Filibus, Archbishop of the Lutheran Church of Christ in Nigeria, President of The Lutheran World Federation.

Second African to serve in this leadership position
WINDHOEK, Namibia, 13 May 2017 - Rev. Dr Musa Panti Filibus, Archbishop of the Lutheran Church of Christ in Nigeria (LCCN), has been elected President of The Lutheran World Federation (LWF). The Twelfth Assembly of the LWF meeting in Windhoek, Namibia, elected Filibus today. He is the 13th person and the second church leader from Africa to hold the office since the LWF was founded in 1947.

Filibus was elected on the first ballot. He received a total of 274 votes out of 303.

Communion is a gift
Addressing the LWF Assembly delegates upon his nomination on 12 May, Filibus said nurturing communion relationships, mission, gender justice, diakonia and addressing human tragedy, youth in the church, and inter-religious relationships for peace and justice are key priorities for him.

“Communion is a gift,” said Filibus, adding that communion building must be nurtured. Building communion must also be done with a sense of ecumenical accountability.”

Filibus, who in his previous work participated in the development of the LWF Gender Justice Policy, says he is committed to its implementation, including addressing, “how to support member churches in understanding and addressing these questions.” He was instrumental in the process leading to the ordination of the first LCCN female pastor in 1996.

Commitment to youth in the life of the church also need to be upheld, he said, and called for the movement of the Global Young Reformers’ Network to be brought to local church levels.

Diakonia, effective and empowering service in response to human suffering, injustice, and emergencies, is a key priority for the LWF. “My dream would be that the LWF remains a relevant and key international diaconal player in addressing human tragedy,” Filibus said.

Two years ago, dioceses in the northeastern region of Nigeria where Filibus comes from, had to suspend church activities in many congregations to avoid attacks by the Boko Haram militant group during worship services. “I see the great need to pay attention to questions of religiously motivated violence in the world today,” he said.

Filibus pointed to growth in churches in the global south and declining church membership in the global north as areas where LWF accompaniment is required. “We have an obligation to listen to one another and support each other in these struggles,” he said.  “No church should be left to feel it is alone.”

Experience in the LWF communion
The newly elected president is not new to the work of the LWF communion. From 2002 to 2010, he served as area secretary for Africa in the Department for Mission and Development (DMD), accompanying member churches in Africa in various areas of their ministries. He was appointed DMD director in 2010.

In 2013 he accepted the call to serve as bishop of LCCN’s Mayo Belwa Diocese. He was elected to serve as archbishop of the church in 2016.

Filibus, 57, was ordained as a pastor in 1994. He studied theology in Nigeria and in the United States, where he obtained a PhD in pastoral theology. He and his wife Rev. Ruth Filibus have three adult children.

Newly elected LWF President Archbishop Musa Panti Filibus will succeed Bishop Dr Munib A. Younan of the Evangelical Lutheran Church in Jordan and the Holy Land, who was elected at  the July 2010 Eleventh Assembly in Stuttgart, Germany. The first LWF President from Africa was Bishop Josiah Kibira from the Evangelical Lutheran Church in Tanzania, who served from 1977 until 1984.