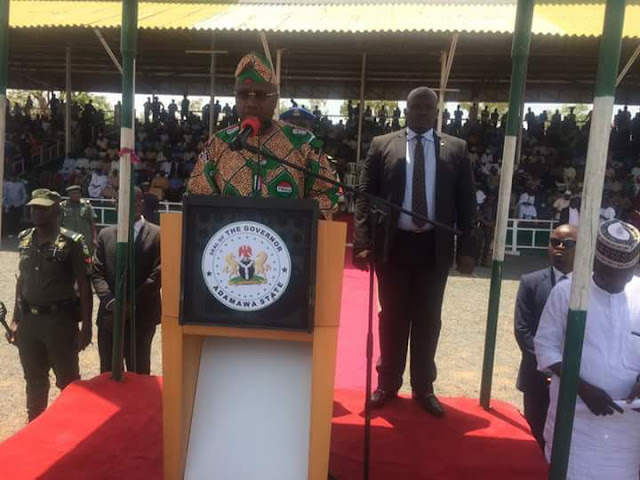 Nigeria Labour Congress (NLC) in Adamawa State rains accolades of praises to the Executive Governor of the State,Senator Muhammad Umaru Jibrilla Bindow as one of the most hard working Governor that is performing well in terms of physical infrastructure in the country.

Dauda Maina who is the state's Chairman of the Union while addressing hundreds of Civil Servants gathered at the Ribadu Square to mark this year's May day celebration in the state, called on the state's workers to corporate with the Governor in order to do more in touching the lives of people in the state.

"It's good to announce that for the past two years Bindow is the only Governor who is always registering his personal presence not in representation to join the thousands of workers of the state to mark our day." Maina Said.

Comrade Maina however laments the laxity of the State government in addressing the lingering problems of non payment of salaries to the state's civil servants.

He urge the Governor to clear the four months outstanding salaries of Local Government workers particularly the school teachers .

Also, he called on the government to make a clear policy statement on how the outstanding salaries of three and for months owed Local Government workers , Primary Health Care Development Agency and Primary School teachers respectively would be paid within possible shortest time.

Dauda urged Governor Jibrila Bindow as matter of urgency to set an investigate panel to probe the activities of the state Ministry of Local Government which he accused of mismanagement of   the state resources under its care.

The Governor in his speech promised that the workers will be carried along in decision making. He said that he is working toward the settlement of the outstanding salaries of the Local Government workers which he claimed it's administration inherited.