NEWS :Governor Bindow Calls on Investors to come and invest in Adamawa state. 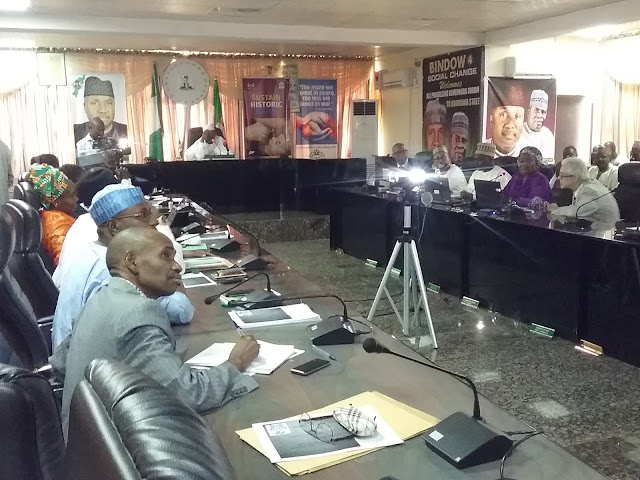 The Adamawa State Government is to partner with a  Foreign  firm "Sovereign  Investment Fund " for the  provision of basic social amenities to the people of the state.

The  Representative of the Sovereign  Investment  Fund Mr Geoffrey  R .Scott  who stated this during a  presentation to the  members of the State Executive Council at the Council Chambers  of the Government House, Yola.

According to  Mr . Scott, SIF has already  set aside Two  point Eight Billion (2.8b) Dollars  to provide  grant  meant to  provide  developmental  projects  across Adamawa state.

He  explained that the  State Government will injects  substantial amount of money  in order to  actualize for the release of the  funds  through  Mella Bank , the World  largest  Trust  Bank.

The Representative of the Sovereign Investment Fund  also explained that the Organisation   in collaboration with the  Federal Government  Agencies  such as  EFCC and the CBN  for the safety and  transparency in the  process of  granting the  funds.

While responding, Governor Muhammed Umar Jibrilla had appreciated the efforts of the  presenters for choosing Adamawa state  as one of the states  to  benefit from the Investment and assured that Adamawa state Government will continue to support such development for the overall progress of the people of Adamawa state.

Governor Muhammed Jibrilla  also  urged  other investors to come and invest in the Adamawa state as the state  has abandoned  resources  untapped.

Also in his remarks, the Secretary to the State Government Dr Umar Buba Bindir announced the  constitution of a  special committee  headed by Governor  Jibrilla, while Honourable Commissioners of Finance, Commerce, Local Government Affairs, and Attorney General and Commissioner for Justice  as members and the state  Accountant General will be the Secretary of the committee.