NEWS:Members of the House of Representatives Rates Governor Bindow High. 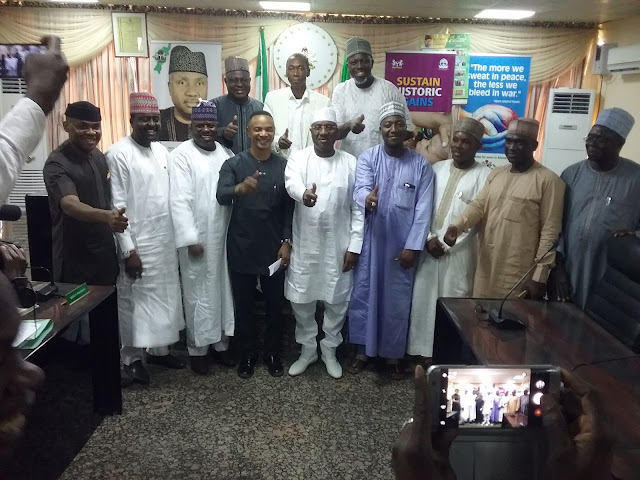 The Chairman of the House of Representative Committee  on Youth and Social Development  Hon. Segun  Adekola has commended Governor Muhammed Umar Jibrilla for his giant strides in transforming Adamawa state.

Honourable  Segun  Adekola  stated  this when  the Members of the committee  on Youth and  Social Development paid a courtesy visit on Governor Muhammed Jibrilla at Government House, Yola.

The Federal Lawmaker had told Governor Jibrilla the Committee were in Adamawa state on a  familirization tour to NYSC  Camps  across the country with Adamawa state  in particular  to see the level of preparedness  by the  Government  for the hosting  of another batch of  the Corps Members in the state.

He  said that the  facilities  inspected by the Committee  is well enough to appreciate  Adamawa state Government for providing necessary  items at the camp.

Responding, Governor Muhammed Umar Jibrilla  said Adamawa state is peaceful and calm  at present  and assured Members  that the state Government  is doing everything  possible to ensure that the next batch of Corps Members to be deployed to the  state  were properly taking  care of.

The Governor also  pointed out that the  State Government  has relocated the Internally Displaced Persons  at the Orientation Camp so as to allow the Corps Members  enjoys the  facilities  being provided by the Government.

Also in his remarks, the Secretary to the State Government Dr Umar Buba Bindir highlights some of the remarkable achievements recorded by the present administration under Governor Muhammed Umar Jibrilla for the past Two Years while piloting the affairs of Adamawa state  as the Governor.

Dr Umar Bindir also  said that the NYSC  scheme  has impacted  positively  especially in the areas of Education and Health Care  services in the rural communities and described the  Youths  as the future leaders of the country.