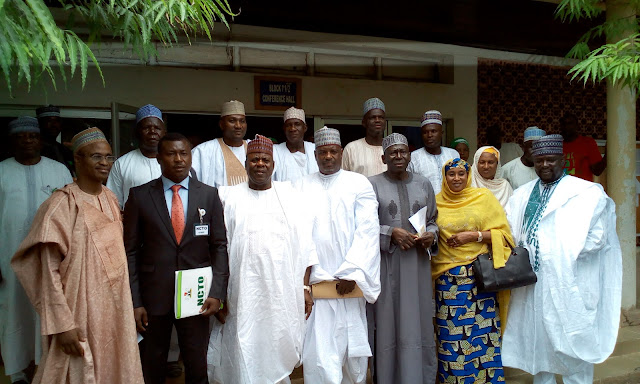 He said the Programme is one of the provisional programmes initiated by the Federal Government to assist the poor and the vulnerable in the society .He urged the Cash Transfer Facilitators to deliver their task without any bias.

Also, he assured that the Adamawa State Government will ensure the success and sustainability of the programme.

In a welcome address by the state Hon. Commissioner  for Women Affairs  and Social Development, Alhaji AliyuTola said that the Federal  Government  and World bank has discovered that 58 million  Nigerians are not able to afford three square meals and the discovery has eventually brought about this programme in order to assist the poor and the vulnerable with the sum of N5,000 to enable them come out of poverty.

Honourable Tola also stated that 6 LGAs has been selected  for the take off of the programme; Madagali and Michika from the Northern  zone, Song and Gerei from the Central zone and Numan and Lamurde from the Southern zone. He added that the 6 LGAs are just a starting point and others will follow eventually.

In a remarks by the Focal Person of State Operating Coordinating Unit Commodores  Usman Sali Bodes said the Federal Government has designed some Social Investment Programmes led by APC administration. They have designed  programmes that are interrelated that gives a final output as poverty reduction.

However, these programmes are; N power programme which is essentially to reduce the rate of unemployment among youth in the country ; the second one is aimed at increasing enrollment rate of pupils in the primary school in the free feeding programme which is yet to kick start in the state; another one is the Government Enterprise  Empowerment Programme, it is an interest free loan which is meant for market women and traders in the market, this very programme has commenced in the state and positive impact have been recorded from the 21 LGAs. The next is the National Cash Transfer which he said is the purpose of the gathering.

He went further to explain that the programme is aimed at providing targeted transfer of cash to the poor and the vulnerable,  adding that the cash transfer circle is essentially for 3 years after which it is expected that the beneficiaries graduates and other house holds that are in need will replace them.

Bodes said that an assessment team will go round to check and access the progress of the program at the end of the day, adding that about 1 million house holds are nationally expected to benefit from the programme.

The State Coordinator of the State Operations Coordinating Unit, Mr Jika Mohammed presented a paper on the Practice of Community Based Targeting (CBT). He explained how the unit has been operating and had listed some challenges faced by his team as thus;  security challenge, Poor network and transportation due to the banned on motorcycles and difficult terrains, Political blackmails by some individual in some communities, Raining season (most farmers are not available because they are always on their farms)  and Threat on Community Based Targeting /Enumerators.He called on the State Government for an intervention.

Mr Joseph M. Zhegun, the Head of State Cash Transfer Unit in a remark has stated the objectives of Cash  Transfer Programme as follows; To increase poor households consumption in te state using the Social Register in selecting beneficiaries ; to provide a safety net for te poorest house holds and encourage asset acquisition for poor house holds; to reduce the vulnerability of poor house holds and build their resilience to shocks; to improve health outcomes of poor house holds such as the reduction of child and maternal mortality as well as incidence of malnutrition;  to improve educational outcomes such as school attendance, enrollment and completion rates; to promote financial inclusion and stimulate productivity thereby reducing poverty. He had also urged the Facilitators to take the training serious because they have direct link to the people at the grassroots.

A Good will message was delivered by Mrs Aisha Usman Ardo who is the Deputy Permanent Secretary of State Planning Commission unbehalf of the Chairman State Planning Commission,  Engr.  Arin Lutu. She emphasized on the importance of the programme in the lives of the poor and the vulnerable in the State adding that the N5,000 is to reach the potential beneficiaries.

Other good will messages were delivered by Women Society Group of Nigeria, Executive Chairman of ADSUBEB, and Permanent Secretary Ministry of Women Affairs and Social Development.

In an interview granted by Mr Kola Solomon of the National Cash Transfer Office Abuja, said the programme is aimed at helping the poor and vulnerable in our nation out of poverty . He said that these people are being identified through a means called Community Based Targeting (CBT), after which the beneficiaries will be enrolled by the Cash Transfer Office, open accounts for them and 5 thousand naira benefit on monthly basis will be sent into their accounts.

He said that once the cash transfer facilitators are trained, they will move to the communities and start enrolling the beneficiaries. "Once they are enrolled and accounts are opened for them, we hope that by next month, the beneficiaries should start receiving their 5 thousand naira stipind" he said.