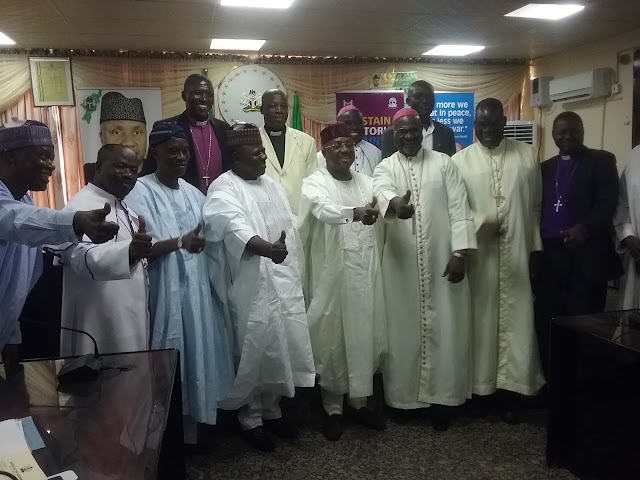 Governor Muhammed Umar Jibrilla  urged the people of Adamawa state to  shun religious intolerance and bigotry for the progress and  development of the state.

The Governor stated this when he granted in audience the  Archbishop of the  Lutheran Church of Christ in Nigeria and President of the Lutheran World Federation  Most Reverend  Musa Panti Filibus who paid him a courtesy visit at Government House Yola.

While  congratulating the Archbishop Musa Panti Filibus over his appointment  as the present  of Lutheran World Federation, Governor Muhammed Jibrilla assured that  government will  collaborate with the LCCN  in addressing  the  problems of Religious Teachers and  Instructors in public schools in the state.

The Governor also assured that government will look into the issue of reconstruction of worship places destroyed by the insurgents in the Northern part of the state and  urged the  citizens to be united and promote peace and harmony.

He however  charged religious  leaders to preach for the peaceful coexistence of the people of the state  and the country at large, and urged them to  pray for the quick recovery of President Muhammadu Buhari's health.

In his remarks the Archbishop of the Lutheran Church of Christ in Nigeria and President of the Lutheran World Federation Most Reverend Musa Panti Filibus acknowledged the  commitment of the present administration under Governor Muhammed Umar Jibrilla  in restoring  and sustaining peace  in  Adamawa state.

The Lutheran World  leader also commended Governor  Jibrilla  for his  developmental efforts in transforming the state within shortest period as well as  declaring state of emergency on Education and Health sectors and requested for the employment of CRK Teachers in public schools so as to restore moral values in the society.

He also  assured the Governor that the Lutheran Church will support the present government and consider it a  point of  duty to pray for the Governor and government of Adamawa state in order to succeed.