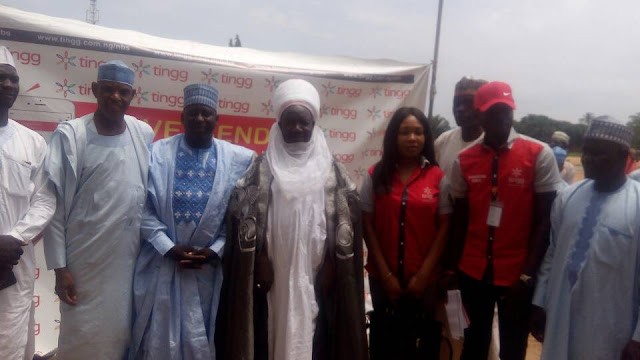 The Executive Governor of Adamawa State, Senator Mohammed Umar Jibrilla, has been commended for initiating and contacting the Cellulant organization in Lagos State to come and alleviate the problems of banking activities in the State most especially in Ganye Chiefdom.

His Royal Highness, Gangwari Ganye, Alhaji Umar Adamu Sanda (OON), made the commendation while declaring open the services of the organization in his Chiefdom at Ganye, Ganye Local Government Council.

Gangwari Ganye who took his time in thanking Governor Bindow for identifying with their banking distressed since the invasion of Boko Haram in the area said he gave the directive to their son of the soil, the Deputy Governor who doubles as the Shettima Ganye, Eng. Martins Nasir Babale, to write to them; including their three Local Governments Chairmen to mobilize their people to patronize the bank.

He described the bank as a new initiative and development considering its ways of service delivering. So he called on the business class, educational institutions and any other class of people in his domain to patronize and open an account with the bank since its minimum amount of deposit is N500, though, he bolstered that even N1000 can be afforded by many of them.

Hence, Alhaji Adamu Sanda urged all the people of the Chiefdom to endeavor and get an account with the neighborhood bank as according to him will cushion their hardship for banking transactions.

However, the monarch also made a passionate appealed to the Cellulant neighborhood bank to extend their services to all the Local Government Areas of the chiefdom in order to ameliorate their suffering for banking transaction.
The Paramount ruler equally assured them his support and that of his people that he will make sure all the District Heads mobilizes the people of their district to open an account with the bank.

Also speaking, the Executive Chairman of Ganye Local Government Area, Hon. Mathias Emmanuel, thanked God Almighty and Governor Jibrilla for inviting the Cellulant Neighborhood Bank from Lagos to come and ease the banking suffering of their area.
Honorable Emmanuel noted that the entire Ganye Traditional Council will ever remain grateful to God and Governor Bindow due to his care and consideration of the council in all his affairs. Stating that with the coming of the Cellulant Neighborhood bank,  it will alleviate their banking hardship.

Therefore, the Executive Chairman assured the Company of his council's support that he will provide them with the necessary things they will require to run their services in the area as well guarantees them the security of their lives and property by the help of God.
Earlier in her speech, Mrs. Jennifer Onyebuagu, the Enterprise Business Manager Corporate Solution for Cellulant Nigeria Limited, said Cellulant is a Pan African digital payment company located in eleven countries across Africa to be included, Mozambique, South Africa, Zimbabwe, Ghana; Nigeria etc.

She noted that the idea of the neighborhood banking services is to bring the bank closer to the people, i.e community banking whereby the indigenes and citizens of Adamawa State do not have to go to very far locations to consume financial services. They don’t have to queue in the bank just to withdraw money, civil servant don’t need to be sleeping in the bank just to get their salaries; stating that they have brought the bank closer to the people.

Mrs. Onyebuagu stressed that the conception of TINGG is a product that you can consume through your mobile phone to send and receive money from any bank in Nigeria, pay your bills, school fees, tax and buy airtime.
Other products are: withdraw cash, get instant ATM card after the open of an account, register/verify your BVN, register your WAEC, JAMB and Farmer ID validation etc. so anything you can do with your bank you can also do it with your TINGG Neighborhood Banking Services.

Therefore, the Enterprise Business Manager thanked His Excellency Governor Jibrilla for identifying with her organization as well thanked the people of Adamawa State most especially the Gangwari Ganye for the warm reception.

She pledged to her customers that there is no need for them to panic as her bank has registered with all the necessary financial institutions for good service delivering. Maintaining that they have invested over five hundred U.S dollars to bring in the kiosks, so anywhere it will be seen in Adamawa has 24 hours electricity power, equip bank deposit slip and everything that is needed for cash-out and withdrawal.