Home » News » NEWS: " FEEL AT HOME" GOV BINDOW TO IGALA AND IDOMA COMMUNITIES IN THE STATE.

NEWS: " FEEL AT HOME" GOV BINDOW TO IGALA AND IDOMA COMMUNITIES IN THE STATE. 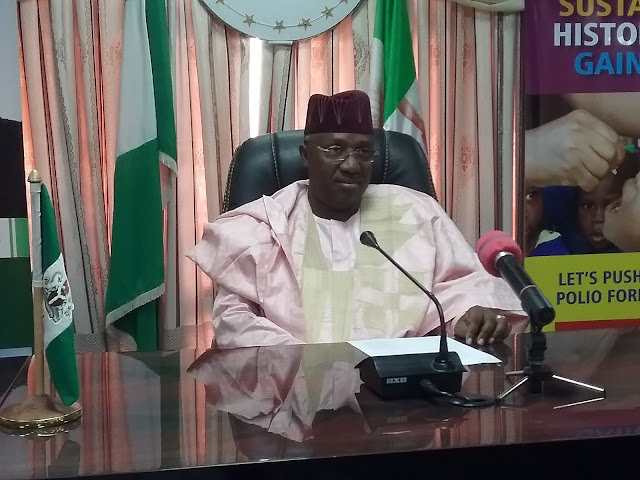 The Executive Governor of Adamawa State, Senator Mohammed Umar Jibrilla, has urged the members of the Idoma Community living in the state to feel at home and participate in everything they are doing because they are also indigenes of the state. Governor Jibrilla made the assertion during a meeting with the Idoma Cultural and Community Development Association, in Yola.

The Governor who was represented by the Honorable Commissioner of Information and Strategy, Comrade Ahmad Ibrahim Sajoh said their ground rules in Adamawa is everybody that is living in the state as a Nigerian, is a Nigerian. He noted that the state has about eighty seven ethnic groups but they used to keep these ethnic nationalities together and create a united forum among them, so they should not be intimidated.

Comrade Sajoh stressed that they don’t look at people based on their ethnic group because if they do, they cannot be able to run the affairs of their state. He maintained that their believed was that they are Nigerians, living together with them, since this is Nigeria; their country and territory.

The Commissioner frowned that anybody given anybody noticed to leave anywhere is not representing the interest of Adamawa State. Stating that they don’t know about it, don’t support it; will not support it and they don’t want to hear about it.
Therefore, Comrade Sajoh charged the Idomas not to be afraid because they are protected as any Adamawa’s indigene and the state government is ready to protect anybody living in the state.

Earlier in his speech, the President of the Idoma Community, Mr. Peter Ada James, thanked Governor Mohammed Umar Jibrilla for the visit. He stated that Idoma people are not trouble makers but are people who believe in dialogue that would give them best solution to their problems.
Mr. James boasted that the population of the Idomas in Jimeta and Yola North Local Government alone is up to five thousand, so they want to convey their desire to the governor that the entire population of Idoma in the state is strongly in his support for his good transformation work he is doing in the state. Maintaining that they (Idomas) are not known for laziness but are known for good productivity, thus, in view of that they are in support of his good governance.

While reiterating their support to Senator Jibrilla’s administration, the President noted that their stand in the current hate speech is that they Idomas are not known for generating trouble anywhere they are and as such they do not support the hate speech and the desire for division of the country.

Therefore, he made a passionate appealed to the governor and the people of the state that they want a collaboration with his government, position of Personal Assistance (SA), maximum security and corporation with all the  people of the state.
Similarly, Governor Mohammed Umar Jibrilla has also visited and assured the Igala Community living in the state safety of their lives and properties.