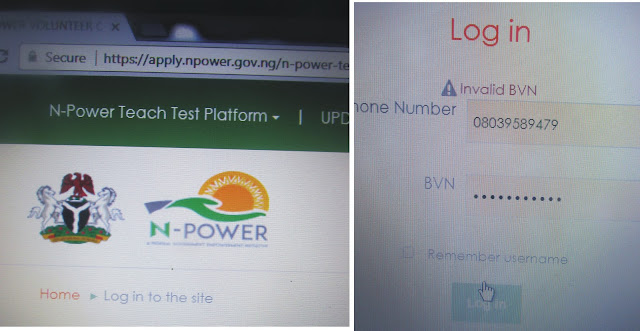 The applicants of  the popular N-power programme complains bitterly about N-power portal,  they complained that the portal denies them access to write their quizzes that are ongoing.

Many of the applicants narrated that  during the application, they were asked  by the portal to use their Bank Verification Numbers (BVN), first name , Last name, middle name, date of  birth etc (as on the BVN) to  register which they did. After the registration closes the portal could no longer recognize them as applicants, instead, it displays  “ Invalid BVN”  on the screen.

The applicants expresses  fairs that if nothing is done by the authorities concern, many potential beneficiaries from Yola and Adamawa  will not benefit from the programme.

When contacted by phone, the authorities concerned (N-power) said that the case of  “Invalid BVN” is simply a situation where applicant’s supplied data  that does not exist in his/her BVN during the N-power application process.   However, many of the applicants insisted that  the data they used are as correct and accurate  as the data on their BVNs.