NEWS :Governor Bindow Says Unity and peaceful Coexistence of Nigeria is not Negotiable. 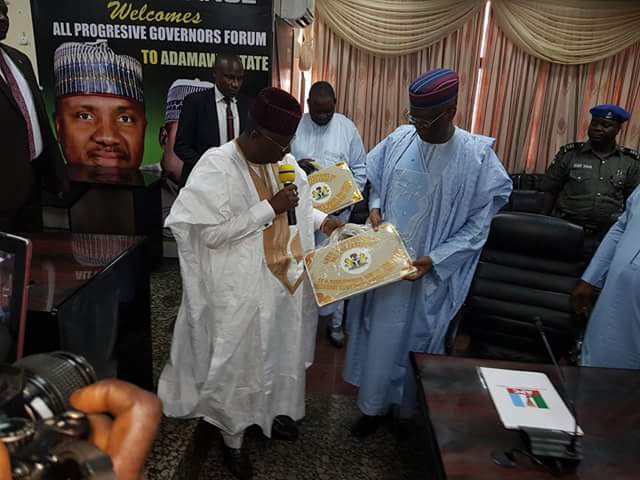 Governor Muhammed Umar Jibrilla says Unity and peaceful coexistence of Nigeria as a Nation is  not Negotiable.

The Governor made the  statement while  declaring open a  Zonal Public  Hearing on True  Federalism  by the All  Progressive Congress  Party  held at the Banquet Hall of the Government House Yola.

Governor Muhammed Umar Jibrilla  explained that the  prevailing Unity of the country  cannot be  compromised. He  said that the opportunity  is rare one and urged that  Nigeria will  outlived it's challenges despite the  current issues  bedevilling the  country.

According to Governor Jibrilla, President Muhammadu Buhari  has done well and  called for  prayers to enable him continue with the  developmental  strides  and uniting the people of  Nigeria as a  Nation.

In his remarks, the Chairman of the occasion Former Governor of Edo  state  Professor  Osarhiemen  Osumbo  said issues  should  be  bothered  on Unity of Nigeria and thanked Adamawa state Government for  creating the enabling  atmosphere  for the success of the  public hearing. 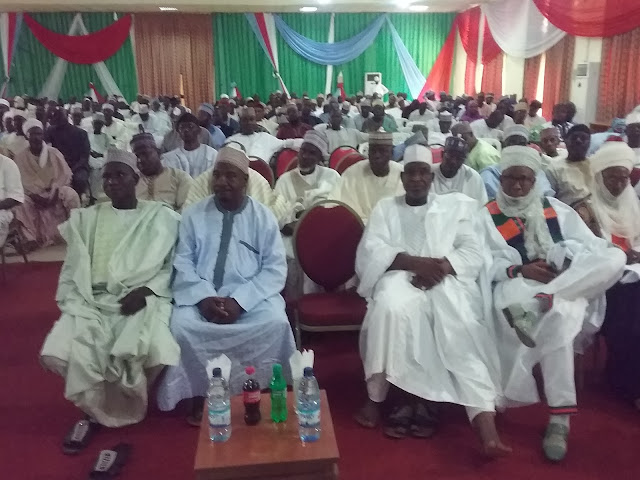 Also in his contribution, an elder statesman Alhaji  Ahmed Joda  reiterated the Unity of Nigeria  as a nation and advocated for creating of True federalism  that will addressed the  aspirations and desire  of the  verse people of  Nigeria.

The  State Attorney General and Commissioner for Justice Barr.Bala Silas Sanga  who presented a memo  on behalf of the Adamawa state Government  said  corruption  should be  tackled  for development  strive  while the  creation of  states is not a beneficial to  Nigeria's  at present.

On natural  resources and  Allocation,  the Attorney General emphasised that  Legislative  Taxation  should be  imposed  to enable the  states exercise  priority  over its resources and  make it contribution to  national  government.

He however  advocated that the  creation of  Local government areas should be the responsibility of the state government  while  independent candidates  be advocated.

Meanwhile,  the All  Progressive  Congress  (APC ) has reiterated  it's  determination to  ensure that True  Federalism  and Restructuring  in line with  its campaign promises to the electorates.

The  former  Edo  state Governor Professor  Osarhiemen  Osumbo  who stated this when he  led a delegation of  committee Consultation in North - East  during a courtesy call on Governor Muhammed Umar Jibrilla  at Government House Yola.

He explained that the  consultation is to foster Unity and  peace.

Professor  Osumbo  said the  consultation is for members of the  APC  from Adamawa  and Taraba states  and urged  that True  Federalism  and Restructuring  is part of the policy of the  President Muhammadu Buhari  led government.

He also explained that the  committee was constituted  by the National chairman of the APC  to meet with  members and forward the outcome of the  consultation  to the national secretariat  of the party.

While responding, Governor Muhammed Umar Jibrilla  said  Adamawa state Government is  doing everything possible to  improve on the security Situations in Adamawa state.

The Governor also  said that  Adamawa state is very calm and stable  in terms of security and  appreciated the  determination of  President Muhammadu Buhari  by restoring  peace and security in the North East.

Also in his remarks, the Honourable Commissioner ministry of Information and Strategy Comrade Ahmad Ibrahim Sajoh  said the  meeting  was to seek opinion  to people with the  aim of  producing a working  document  for the party.