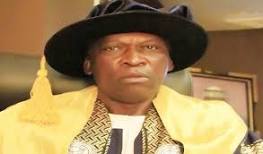 Adamawa State College of Education Hong, an affiliate of Ahmadu Bello University Zaria   has fixed November 15th for it resumption date for students admitted into the 2017/2018 academic session for the commencing of its degree programmes.

The fixed date for resumption was made known to Journalists in an exclusive interview by the Provost, Prof. Johnson Pongri, while speaking on the commencement plans for the College’s degree progamme.

According to him, “successful candidates in the admission exercise of Adamawa State College of Education Hong affiliated degree programme with the Ahmadu Bello University Zaria are to be informed that the resumption date for 2017/2018 academic session is fixed for Monday 15th November, 2017.”

Pongri, further added that students are advised to “visit the College’s website “www.adscoe.com” for details as from Tuesday 18th September, 2017.”

The ABU affiliated college will be offering four Education-related courses will it gets underway from 15th November 2017.

The start of the undergraduate studies will bring a stop to the Adamawa State College of Education’s 18 years of waiting to becoming a degree awarding institution and a dream come through for the Provost, Professor Johnson Pongri.

The chairman Governmening Council , Hajiya Salamatu commended Professor. Pongri Johnson for laying out the blueprint and disclosed efforts by the Provost to improve on revenue to include the utilization of the Tetfund grants.

The Chairperson said that the present Provost had done tremendously well by improving on the infrastructure of the college, stressing that the college was in a bad condition before the assumption of Pongri. The elated Chairperson also pour encomium on the governor for improving funding for the college. She said that the giant stride recorded in the institution was due to the commitment by both the provost and the governor. She noted that the approval for the commencement of a degree programme was another land mark achievements for the state government under Gov. Bindow’s watch. She added that the state could henceforth boast of awarding degrees from two of its own institutions. Salamatu also said that the college was equipped with adequate facilities capable of running the programme. “I want to commend the effort of the provost Dr. Johnson Pongri through his blueprint we have gotten approval to commence a degree program for the 2017/2018 academic session.

She lauded Governor Umar Jibrilla Bindow for granting the College tripartite approval and the entire staff of the institution, stressing that “what is fundamental is their welfare.” However, she listed some of the challenges facing the institution to include school fees payment by students, examination malpractice and insecurity which he said was been dealt with.