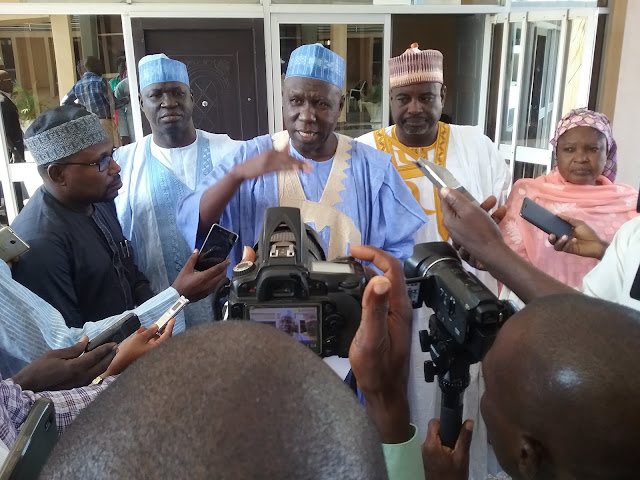 Governor Muhammed Umar Jibrilla has  approved a Minor Cabinet Re - shufflement of Members of the State Executive Council.

The Honourable Commissioner Ministry of Information and Strategy Comrade Ahmad Ibrahim Sajoh along side Honourable Commissioners of Works Barr.Lilian Stephen, Women Affairs and Social Development Aliyu  Bello Tola, Commerce and Industries Alhaji Umaru Iya Daware and  that of  Housing and Urban Development Engr. Abubakar Magaji  disclosed this  while  briefing Journalists at the end of the Thirty -First  Weekly  State Executive Council Meeting presided over by Governor Muhammed Umar Jibrilla  held at the Council chambers of the Government House Yola.

The  Council also approved for the construction of  4.1 Kilometers of Roads  in Fufore Local government Area which was awarded to Al-Fajir Constructions Company at the cost of  Six Hundred and  Sixty  Eight  Million Naira.

The EXCO also discussed on Women  empowerment by providing  skills acquisition , Tools and  conditional cash backing to various Women groups in Adamawa state, stressing that the Central Bank of Nigeria  has opened a  Window  for Micro ,Small and Medium term development for the state, adding that  Adamawa state is  on the highest level in poverty based on the United Nations  assessment.

The Commissioner said that the EXCO also  noted that the security Situations  has improved tremendously with the  provision of  street lights across the state.

Accordingto Comrade Ahmad Sajoh,  the Council  considers to fine tune the government  to Synagise more, pointingout that  there will be  a  greater cooperation  between the different  arms of government and segments of government as well as a periodic meetings  between  the Secretary to the State Government  and the Secretaries  of the Local Government Councils  in order to institutionalised development and maturity in governance.

The  Information Commissioner  further explained that for the first time in  history,  the United Nation  is to sponsored  a Four Day meeting of  all Attorney - Generals  of the Federation in the state  to discuss  Justice Delivery  and Gender  Based  Violence in  Nigeria, stressing that  during the  meeting  Adamawa state  will  show  case the diverse cultural  heritage of the state.