Home » News » NEWS:Governor Bindow Says Transparency and Accountability are the Watch Words of his Government

NEWS:Governor Bindow Says Transparency and Accountability are the Watch Words of his Government 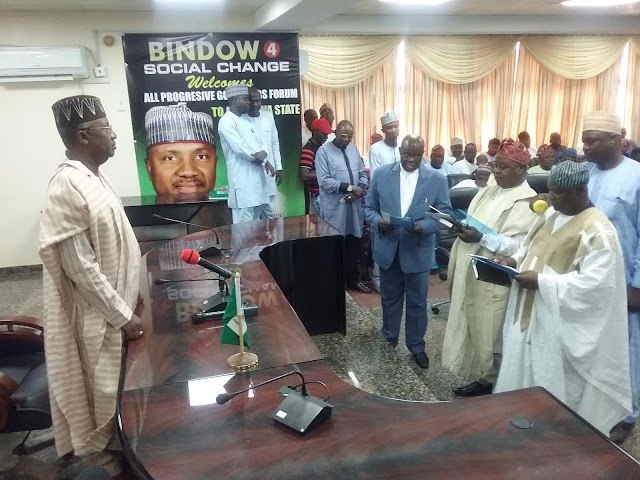 Governor Muhammed Umar Jibrilla said the  basic  cardinal principles of his administration is based on Transparency and Accountability.

The Governor stated this while  presiding over the swearing in Ceremony of Two  Newly Appointed  Permanent Secretaries Mr. Job H. Sahma  and Mr.Ngangura Jocob Menas at the Council Chambers of the Government House,  Yola.

While congratulating the newly appointed  Permanent  secretaries for their exalted positions, Governor Muhammed Jibrilla warned  them to adhered by the Oath of office taken  as they would be accountable of their actions and deeds before Almighty.

In his presentation the State  Head of Civil Service Dr Louis Solomon Mandama said the  Two  newly  appointed  Permanent Secretaries  were people of  proven integrity and  an assets to the  government  and assured the Governor of  their total loyalty and support to the present administration.

Responding on behalf of the appointees  Mr. Joab  H. Sahma  thanked  Governor Muhammed Jibrilla for giving  them the opportunity to serve in his government as Permanent Secretaries.

The Oath of office was administered by the Solicitor -General and Permanent Secretary Ministry of Justice Barrister Suleiman Muhammed  and attended by  members of Bwattiye  Community and  well wishers from  across the state.