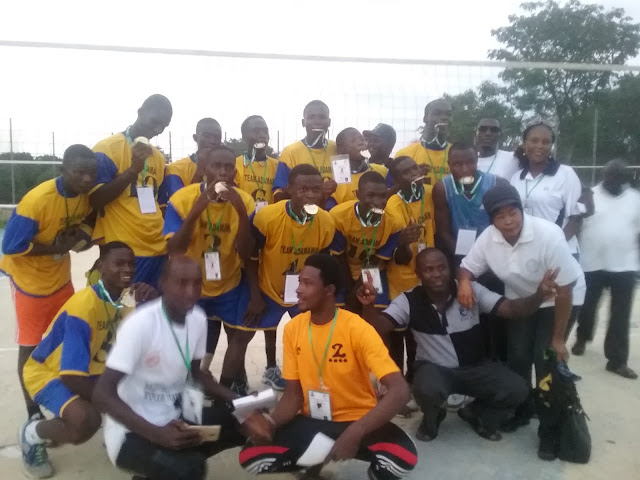 In the soaked tension match,  Adamawa had to come from behind twice to beat its Counterparts by Twenty five-twenty three, twenty five-seventeen and Twenty Eight twenty six, to send a wild jubilation at the arena.

The Team beats Ebonyi in its first match by three-Zero, followed by Akwa-Ibom three Zero, Ogun three-Zero, and met with the host state Kwara were it also humbuled it with a three zero in the Semi finals before setting a new festival record as the first state to keep a clean sheet in through humiliating Benue to win the Gold medal.

Speaking on attaining the Feat, Tecnical crew members Comprising Samuel Nicholas and Coach Zumunchi attributed their victory to God Almighty, the players and all that Stood by the team.

The Executive Director Adamawa State Sports Council Mr. Philip Andrew while Congratulating the team expressed joy while promising to immedietly offer a temporary appointment to any six of the Players whose Names will be submitted to the Council by the Tecnical Crew.

He thanked the Adamawa State Government for standing by the team Adamawa as well as the positive roles played  by the SSG and the Chief of Staff to the Governor.

Meanwhile the chances of team Adamawa to pick a medal in the Weightlifting event was dashed despite the sterling performance put up by Abdullahi Abubakar after lifting up an eighty five, ninety and ninety five kilograms more than any other opponents in his Group was over thrown. He was placed over rall fourth best thereby narrowly missing the bronze Medal in the Clean and Jack category.

Both the eight hundred and four by one hundred meters in the Athletics events for Adamawa have crashed out.

In the Badmitton event, Mohammed Aliyu lost out in the second Round, while, Sadam Sidi moved to the last thirty two after beating his oponents from three states to reach the feat.

Adamawa is still competing in Athletics and Badmitton..