Home » News » NEWS:THE NDIGBOS IN ADAMAWA CALLS FOR AN INDIVISIBLE ONE NIGERIA

NEWS:THE NDIGBOS IN ADAMAWA CALLS FOR AN INDIVISIBLE ONE NIGERIA 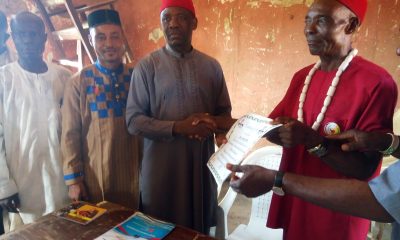 The Ndigbo community of Adamawa state has called on its members to remain calm and law abiding in their dealings following the recent clash between the Nigerian military and some members of the Indigenous People of Biafra, IPOB, that has generated controversy in the country.

Addressing journalists at NUJ Secretariat in Yola, on Thursday, the President General of the Igbo Cultural Association Adamawa state chapter, Chief Fidelis Umeh, alongside his council of elders call on Igbos in the state to go about their businesses without fear of being attacked.

“We the leaders of Igbo Community here in the state are calling on all our brothers and sisters here in the metropolis and in all the local governments’ areas across the state to remain calm and go on their normal businesses” chief Umeh said.

He assured them of the government’s readiness and commitment in ensuring the safety of lives and property of all citizens at any given time.

“we want to use this occasion also to reiterate our solidarity with a united Nigeria where fairness, justice and equity to opportunity are topmost”. This he said will be a bold step towards removing threats to the unity and cohesion of the corporate entity called Nigeria and also guarantees freedom of every citizen in any part of the country irrespective of region, ethnicity or religion.

“His Excellency Governor Muhammadu Umaru Jirbrilla Bindow has said we are one nation and only God knows why he made it so, therefore he seriously warned that nobody can tear this unity which God himself set up”.

He further appreciates the Governor for convening a meeting with leaders of the Igbo community and assuring them of their safety.

Chief Umeh continue to say it was a great family meeting with Senator Jibrilla Umaru Bindow invited the leaders of the Igbo community here in the state where he re-assure them of his word that Nigeria is one .

The leadership of the Igbo community applauded the governor for his hospitality, tolerance to primordial, ethnic and religious differences.

He further thanked the security operatives in the state for maintaining law and other and ensuring the safety of lives and property in the midst of uprising in other states of the federation.

Chief Umeh assured that they will continue to caution their members against any act that may cause confusion or disrupt the existing peace enjoyed in the state.

The Igbo community lauded Governor Mohammad Umaru Jibrilla’s stands on the quit notice earlier given to Igbos in northern Nigeria by a coalition of Northern Youths Group, describing him as a role model and a lover of peace and progress of the country.