Home » News » HEALTH: More than One Million Children Will be Immunize...

HEALTH: More than One Million Children Will be Immunize... 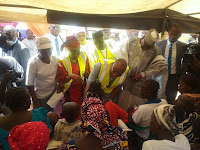 Parents in Adamawa state have been  urged to  ensure that  their  children  were immunized against polio and all other childhood  killer  diseases. 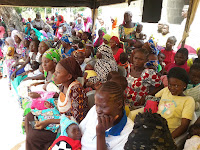 Governor Jibrilla said  immunizing Children against the all killer  diseases  is necessary  in view of its importance  to their health and the nation at large.
“ this  government will continue to support the   immunisation exercise, the  state of emergency declared on  Health sector have started yielding positive results; our health facilities are taking new look, the service delivery and welfare of health workers remain one of the  cardinal objectives of our administration.” He conclude

In her remarks, the Honourable Commissioner ministry of Health Dr Fatima Atiku Abubakar call on  parents and caregivers to ensure that  their children  were immunized, adding that the Immunization  is free and  government  has provide enough  vaccine for the  exercise.
She also explained that the present government under Governor Muhammed Umar Jibrilla has shown concerned about the plight of Women  and Children, adding that  a Healthy children  means healthy  nation, Urged  people to always  report  any outbreak   to nearby  health  facility  for prompt response.

Earlier in his address, the Executive Chairman of  Adamawa state  Primary  Health Care Development  Agency  Dr.  Abdullahi Dauda Belel  said  that  about One  Million  Children  are going to be  immunized during the long week campaign exercise.
He however called on the  parents  to take advantage of the  exercise  to ensure   no eligible  child is left unused immunize.
“ prevention  is always the best option  than cure” he said

In his  vote of thanks, His Royal Highness  Hama Bata Homun Alhamdu Gladson Teneke  thanked  Governor Muhammed Umar Jibrilla  for  choosing  his Domain  to flag-off the campaign exercise  and assured that people of the area would compliment the government  gesture by ensuring that all eligible children are immunized.