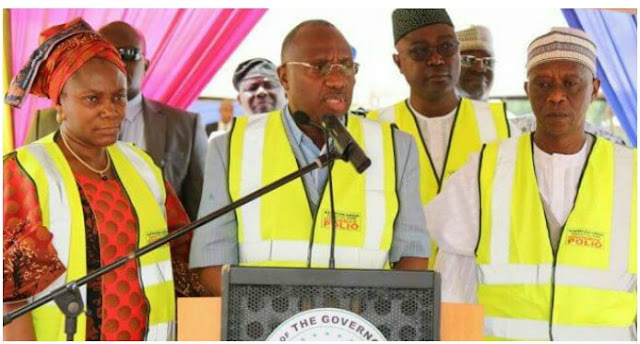 Adamawa state government dispels rumour of contaminated vaccines been administered by health staff, especially among the Igbo children and linked to Monkey Pox Virus to be a mere rumours to divert the attention of the government in fighting the polio virus in the state.
The rumour which circulated in the Local Government Areas of Mubi North, Mubi South, Madagali, Michika,Yola North, Yola south, Mayo Belwa and Song has it that vaccinators are going round administering harmful vaccines to children.
The Chairman of the State Task Force on Immunizations who is also the Deputy Governor of the state, Engr Martins Nasir Babale dispels the rumour through strong worded press release and consider the rumour baseless and falsehood.
“The State Government wishes to reassures parents, guardians and caregivers that there is no government program including polio vaccination that is harmful.” He said
Babale appreciate the huge political commitment of Governor Muhammadu Umaru Jibrila Bindow by the timely flagging off the polio vaccination campaign yesterday in Demsa LGA.
Stakeholders like the HRH Lamido Adamawa, Dr Mustapha Aliyu Barkindo, Commissioner of Health Dr Fatima Abubakar , ALGON Chairman,Barr Aliyu Wakili Boya, State CAN Chairman, Bishop Mike Moses, Security Agencies and Development Partners were recommended for joining the campaign of dispelling the falsehood rumour.
The Chairman of Adamawa Health Care Development Agency (ADHCDA), Dr Abdullahi Belel thanked those who help in convincing the Igbo community to discard and dispel the rumours.
“I am grateful to the District Head of Mayo Belwa and his Eze Ndigbo for their exemplary leadership.” Belel said.