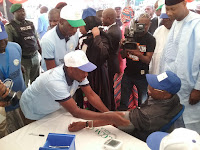 Governor Muhammed Umar Jibrilla has  called on Diabetes   patients  to follow Doctors  advises  in order to  managed  and control the  Disease.
The Governor made the  call while  Flagging off  Free  Diabetes Test and Treatment at the  premises of the Adamawa -German Medical Center Yola to mark 2017 world diabetes day
Governor Muhammed  Jibrilla urged diabetes patient to eat food recommended to them by medical personnel  " we advise people to always  ensure that  they check   their status  in order to get medical  treatment", pointingout that  Diabetes is a   disease that is curable if it's status known in time.
The Governor also explained that his administration has given priority  to Health  sector  as massive  rehabilitation of Health  institutions  were  being undertaken  across the state.
He also lauded the efforts of the  Committee  on Health  of the State House of Assembly for  the support  being extended to the  Executive arm  in terms of implementation of the Health care  delivery  programmes. 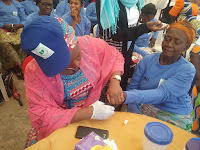 In her key note address, the  Honourable Commissioner Ministry of  Health Dr Fatima Atiku Abubakar  said public  enlightenment on how  and where to get tested is  very important because  prevention  is always better than cure .
Dr Fatima Atiku  added  that Diabetes  is a common  disease and  advised that people to always get tested on routine  basis in view of the complications of the  disease  to human life.
Also in his  Goodwill message, the Adamawa State  Chairman of the Diabetes Association of Nigeria  Dr. Muhammed  Arabi Tukur said  about One Hundred and Fifty  Million people were being affected by Diabetes  World  wide  out of which One Hundred and Five  Million  are  Women who suffer most from the  disease.
He explained that Diabetes is a  chronic  metabolic disorder that resulted to a very complicated and  serious disease, and urged  people to check for  their  status.