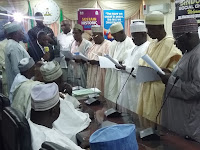 Members of the Adamawa state Independent Electoral Commission  has been charged  to abide by the Oath of office taken.
Deputy Governor Engr.Martins Babale  made the call while  presiding over the swearing in Ceremony of the  Chairman  and members of the  Commission  at the council chambers of the Government House Yola.
Engineer Martins Babale  advised members of the  Commission  to maintain the  Oath taken  as they will be  accountable  for their Duties hereafter.
He stated that the  State Independent Electoral Commission  as a regulatory body, they are  expected to  perform their responsibilities effectively  without fear or favour.
While congratulating them over their appointments, Engr.Martins Babale said the  members were carefully selected  based on merit and their individual  track record. "I plead  with you to  work in  accordance with what you have said before me here "he emphasised.
Responding on behalf of the commission  members, the Chairman of the  Commission Alhaji  Isa Shettima  thanked Governor Muhammed Umar Jibrilla for  choosing  them worthy to serve the people of Adamawa state and  promised to abide by the Oath of office taken.
According to Isa Shettima, the commission will continue to  work in synergy with the political parties  in order to conduct free, fear and credible elections in the state pointing out that election  is the most difficult  and critical  in the  Democratically process and assured that  the members  would  do their possible  best to maintaining the  confidence  of  the people on the  commission commitments to conduct credible elections. 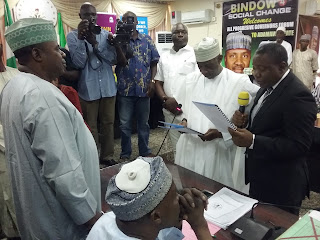