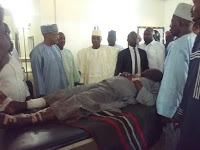 The Governor made the  condemnation  when he visited the the victims at the Specialist Hospital Yola  and the  Federal  Medical Center where  he described  the killing  as barberic  and inhuman  and assured that the  culprits  would be  brought to book and punished.

The Governor also explained that the  situation is  under  control in the affected areas and urged the people of  area to stay in  peace and harmony  with One another  for the progress and development of Adamawa state.

While  conducting the  Governor round the Specialist Hospital Yola, the  Chief Medical Director of the  Hospital  Dr  Bala Saidu  said  about Thirty  victims  were received  and admitted  Twelve  which are receiving  medical attention.
Governor Muhammed Umar Jibrilla  also visited the  Federal  Medical Center Yola to sympathised with the victims of Bomb blast at Mubi Mosque were he condemned the act and called on the people to be vigilant and security conscious and to report any suspicious person or object to the security agents "This  act would  not be acceptable by the  government ,and I totally condemned the  act " he emphasised.

The  Medical  Director of the  Federal  Medical Center Yola Professor  Awwal Muhammed  have told Governor Muhammed Jibrilla  that  Sixteen patients were from Mubi and receiving treatment  as a result of the Bomb blast  while One patient from Madagali  was also being admitted at the Centre, pointing out that Five  more casualties are expected  from Madagali Local government area.
08:21
Adamawa Daily Reports
Email ThisBlogThis!Share to TwitterShare to Facebook