BREAKING NEWS: Farmers/Herdsmen - Panel of inquiry be set up to investigate killings... 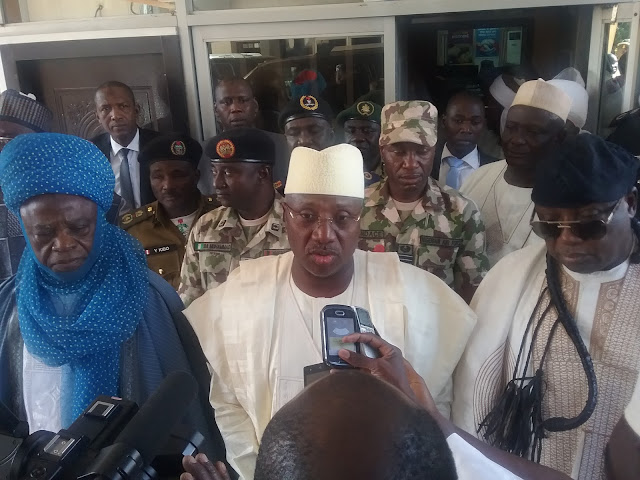 By Yunusa Abdullahi
The Adamawa state Government is to  Set up an administrative panel of inquiry to investigate the  immediate and remote causes of the  recent  killings and attacks in Kikon and Shaforon communities in Numan  Local government area.

Governor Muhammed Umar Jibrilla who  disclosed this at the  end of the Emergency State Security Council Meeting  attended by all the  Traditional Rulers  and service Chiefs  held at Government House Yola.

The Governor  explained that  Adamawa state is peaceful  and government will do everything possibleto maintain peace, protect  lives  and properties of its citizenry.

He also  disclosed that some arrest  have been made in connection with the  killings by security  agencies  and assured that the  culprits would be brought to book and punished accordingly, stressing that government  is on the top of the  situation.

Governor Muhammed Jibrilla has also  commended the  security agencies in for their tireless efforts in maintaining peace and security across the state.
Also  speaking, His Royal Highness the  Lamido Adamawa and Grand Patron of Tabital Pulaaku International  Dr.Muhammadu Barkindo Aliyu Mustafa alongside Hama Bachama Homun Honest Irimiya Stephen  have called on the people to tolerate one another  as well as to  respect the constituted authorities  in order to live in peace and harmony.
The  Lamido also explained that  government should  made cattle routes available to cattle  rearers  across the state  so as to avert future  crises between  farmers and Herdsmen.
According to  Hama Bachama Homun Honest Irimiya Stephen, every  citizen have a right to live anywhere in the state  irrespective of ethnicity or any primordial inclinations, he however  explained that  Traditional rulers  would not allowed innocent people being  killed  without any  reasons in their domains.
21:58
Adamawa Daily Reports
Email ThisBlogThis!Share to TwitterShare to Facebook