Home » News » NEWS : Radio has been Described as a Veritable Tool for Development - Says Governor Bindow.

NEWS : Radio has been Described as a Veritable Tool for Development - Says Governor Bindow. 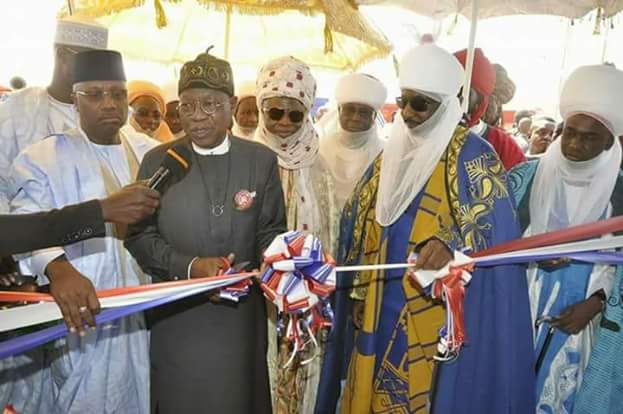 Media  outfits in Nigeria  have been urged to assist  government  in the  campaign against activities of insurgents and Terrorism  in the country.

The  Information  Minister  who  represented  President Muhammadu Buhari  at the occasion said  the establishment of the Radio station is  timely  as government has reached the stage of information sharing in its fight against insurgency and other social vices  in the  society.

According to  Lai Mohammed  , Pulaaku is an embodiments of good  values of  Fulani  culture that includes  Tolerance ,Sincerity,Humility and steadfastness  which  every  Fulani man is endowed with.

While  commisserating  with the government and people of Adamawa state  over the recent  Killings and Bomb blast in Numan  and Mubi  Local government areas, the  Information  minister  called on the people to be vigilant and to  support the gallant forces  Nd other  security agencies in  maintaining peace and security in the country.

He also explained that the  establishment of the Radio station has done  at the  right time  in view of the  importance of  Radio  in communication and  Disseminating  Information to the people.

He however  implored the  Pullaku Radio station  to sensitised  and inform the general  populace  on the activities of  government by  changing the  mentality  of the  people  towards  developmental Journalism, he  stated that  "" Radio remains the most  powerful  source of Mass Communications  as well as the  easiest way  in changing  norms and values of the  society,"" he added.

In his speech, Governor Muhammed Umar Jibrilla  had commended  Lamido Adamawa His Royal Highness Dr Muhammadu Barkindo Aliyu Mustafa  foresight by establishing a  gigantic project and  promised that  government will continue to support such  a laudable efforts by individuals in  order to  publicised government  policies and programmes.

Governor Muhammed Jibrilla  explained that Radio  is veritable  tool for development which can be used to reach out to the audience and  promote rich culturesof the  Fulani’s.,stressing that  establishing Pulaaku FM Radio  has come at a  better time  when people  at the grassroot will be inform  about the  activities of  government  of Adamawa state and  beyond.

Also in his remarks, the  Sultan of Sokoto  His Eminence  Muhammad Sa'ad Abubakar lll who was ablly represented by the  Emir of  Kano  Dr Muhammadu  Sanusi ll had congratulatedthe Lamido Fombina for  establishing the  Radio station, expressing hope that the  station will be a  unifying factor and a medium of interaction among the Fulani race.

Dr  Muhammad Sanusi ll had appealed to the federal government to  investigate killings of innocent people in Numan and Mambila  and to punished the perpetrators  in order to be a detrance  to other"" I hope that what happened in  Numan  and Mambila in Taraba state  will not go unpunished "" he emphasised.

In his speech, the  Founder of the Pullaku Radio Dr Muhammadu Barkindo Aliyu Mustafa said the Radio  station was established to  bridge the gap  and reflect  fearness and balance in the areas of presentations and programmes.

The Royal father said the  establishment of Pulaaku FM Radio  is to promote, protect and project  Fulbe culture, Language and  interest  as well as to  sustain the  unity and  enhance peaceful  coexistence among the people of Adamawa state and the  neibouring  states.

In their goodwill messages, The  Emir of Mubi Alhaji Abubakar Isa Ahmadu, Alhaji  Nana Buba from Cameroon  Republic  and Director  General of the  Federal  Radio Corporation of Nigeria  Alhaji  Mansur Liman explained that  they are ready to support the  Radio  station to achieve the  purpose it was established.

Earlier in his address of welcome  Professor  Umar Pate  who is the Chairman Board of Trustees of Pulaaku FM Radio  said Pulaaku  means knowledge and sanctity, explaining that the  establishment of the Radio station  will also promote peace and harmony  among the diversed people of Adamawa state.