NEWS:Governor Bindow Determine to Transform TV Stations in the State 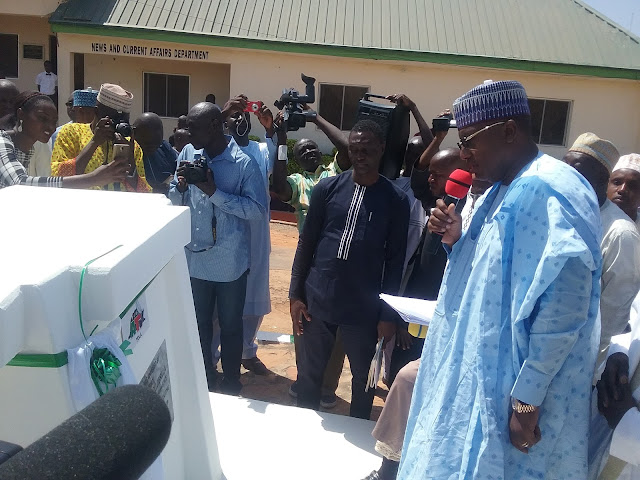 The Governor  explained that the Running costs of the  station would be revived by the Government to enable the  station meet up with its Transmission  requirements.

Governor Muhammed Jibrilla said his Government has provided  over One Hundred  Million Naira to turn round the  station so as to enable the  station deliver  quality services to the people of Adamawa state and  beyond.

He also explained that  a committee headed by the  Deputy Governor Engr.Martins Babale  would be set up to  ensure the completion of  Mubi TV Station to enable the  people of the Northern  Zone  get the first hand information  about Government's  activities and programmes.

In his remarks, the Honourable Commissioner Ministry of Information and Strategy,  Comrade Ahmad Ibrahim Sajoh explained that the  Media is a veritable tool and instrument of development.

According to Comrade Ahmad Sajoh,  the installation of the Twenty  Kilowatts Transmitter of the station would enable the station to transmit  it's programmes  as far as  neiboghring  states ,pointing out that the  State Government in collaboration with the  Presidential Initiatives  is working towards  reviving the Radio Booster  station at Hong  so that the people at the grassroots  would be  informed adequately.

He however called on the  State Government  to absorbed the casual  staff of the  station in order to improve the required  manpower at the station .

Also in their good will messages, Former Governor of the Defunct Gongola state,   Ambassador  Wilberforce Bafte Juta, Deputy  Speaker of the State  House of Assembly  Honourable  Emmanuel  Tsamdu, and the Managing Director of Gotel  Communications  Alhaji  Mohammed  El-Yakub  have commended the  Government, Management and Staff of the ATV Yola  for their courage and  dedication while performing their duties.

In his  address of welcome, the General Manager of the  station Alhaji  Yusuf Nadabo Usman explained that the intervention of  Governor Muhammed Umar Jibrilla to the  station has facilitated the  installation of  Morden Broadcast equipment  to the station which made staff of the station delivered quality  services.

During the ceremony, Governor Muhammed Jibrilla laid foundation for the  construction of Multi-purpose studio for the station.