The  Nigeria Police  has been assured of State  Government  support and cooperation in  maintaining peace and security in Adamawa state.
Governor Muhammed  Umar Jibrilla  stated this when he granted in audience the newly posted Commissioner of  Police Alhaji  Abdullahi  Yerima  Ibrahim  who paid him a courtesy visit at Government House Yola.
Governor Jibrilla said the security  situation  in Adamawa state is stable and calm  at the moment and  commended  officers and men of the state  Police command  for their efforts in  maintaining peace  and security across the state.
The Governor also  said that the  role of the police  is critical  in the  area of maintaining Law and order, revealed that the state government is taking the responsibility of about Four  Hundred  policemen  in Numan area as regards to  their feeding  in order to compliment government gesture.
In  their separate remarks, the Secretary to the State Government Dr Umar Buba Bindir and the  Honourable Commissioner ministry of Information and Strategy Comrade Ahmad Ibrahim Sajoh  have commended the  state  police command  for their efforts in  ensuring  security continue to  prevail in Adamawa state.
They also  assured the  newly posted Commissioner  that Adamawa state Government  will continue to support the  command in the fight against  crimes and  criminality  in the state, pointing out that  maintenance of  security is necessary and essential for  everyone in the state. 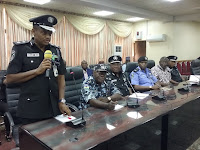 Earlier , the  newly posted  Commissioner of Police  Alhaji Abdullahi  Yerima Ibrahim said he was at Government House to  formally paid a courtesy call on the  Governor and to to reassure that the  safety and  protection of lives and properties of the people of Adamawa state  remains  top priority by his command.
He then  solicited for the support and cooperation of the state  government  and other stakeholders as well as the  entire people of the state in order to maintain the  existing  peace and security.