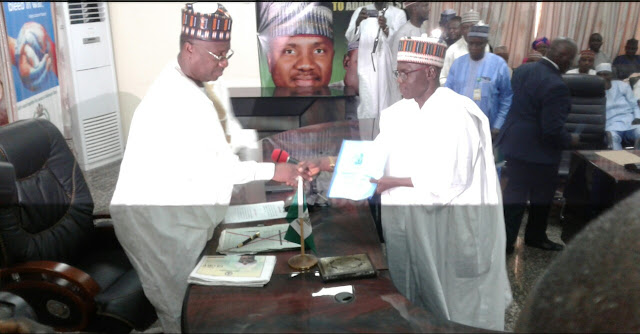 Public office holders have been reminded to be  prudent and accountable in discharging their official responsibility.

Governor  Muhammad Umar Jibrilla made the call while presiding   over the swearing in ceremony  of Alhaji  Bello Buba  Sugu, the newly appointed Permanent  Secretary.

While congratulating the new Permanent Secretary, the Governor had also urged him to abide by the Oath of Office taken and that he will account for his stewardship hereafter, pointing out that  public office is a public  trust.

Responding, the newly sworn  in Permanent Secretary , Alhaji Bello Buba Sugu  thanked Governor Muhammad Umar Jibrilla for finding him worthy to serve in his Cabinet, and  promised to abide by the Oath  taken .

Alhaji Bello Buba  sugu assured that he  will contribute his quota to the development of Adamawa State.
The Oath of Office  and that of Secrecy was administered by the Solicitor General and Permanent secretary,  Ministry of Justice, Barrister Suleiman Muhammed.  