Home » News » NEWS: State EXCO on a Thank You Visit on the Lamido Fombina .

NEWS: State EXCO on a Thank You Visit on the Lamido Fombina . 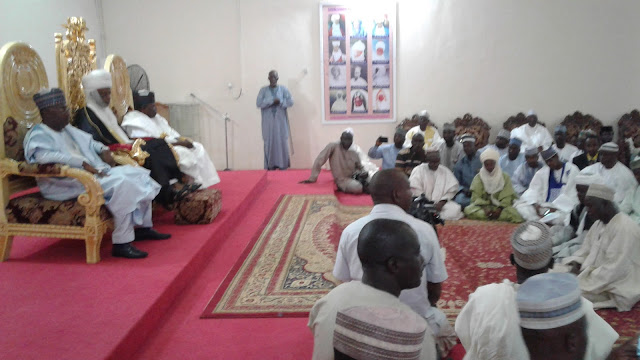 A Delegation  by Members of the Adamawa State Executive  Council  headed by Governor Muhammad Umar Jibrilla was at the Palace of the Lamido Fombina,   His  Royal  Highness,   Dr.Muhammadu  Barkindo  Aliyu  Mustafa to thank the  Royal Father for Traditional Tittle  given to the Secretary to the state Government Dr Umar Buba Bindir as BABBAN MUFTI ADAMAWA.

Speaking on behalf of the delegation, the Chief of Staff Government House Yola  Alhaji Abdul Rahman Abba Jimeta  said the delegation was at the palace of the Lamido to express their  happiness and  gratitude to the Monarch  over the Tittle bestowed on the Secretary to the  Adamawa State Government  DR. Umar Buba Bindir into the Adamawa  Emirate Council .

While responding, His  Royal Highness Dr.Muhammadu Barkindo Aliyu Musdafa and the GRAND PATRON TABITALPULAAKU INTERNATIONAL explained that the  Tittle of Babban Mufti which was given to DR . Umar  Bindir  is appropriate and timely in view of his immense contribution to the  development of Adamawa State and Nigeria at large.
Lamido Adamawa explained that the Tittle of Babban Mufti is a senior councillor in the Emirate Council  and called on the  new Mufti to give useful advise to the Lamido for the progerss and development of the Adamawa Emirate Council  and the state in general.

The Royal  Father also commended the SSG  for his foresight, adding that he  established the  Bindir Computer Centre in Yola Town in order to impact Computer Knowledge on children of the area among others.