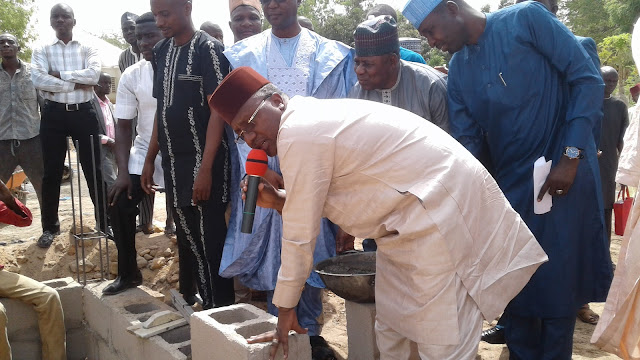 The Governor was speaking  during the foundation  laying ceremony for the
construction of  Dougirei Primary  Health  Centre  held at the  premises  of the state  security  services recently.

Governor Muhammad Jibrilla  revealed that in view of the  importance of Health care delivery to the  people of Adamawa State  his government constructed over Four  Hundred Health  Centres equipped with  modern facilities so as to improve the health conditions of the people of the state.

While  expressing gratitude to the  Director General of the state security services for approving such an importance project in the premises of the DSS  Yola office, the Governor said already  his government  has declared a  state of  emergency on Health  sector.

He also commended the Executive  Chairman of Adamawa State  Primary Health  Care Development  Agency  Dr. Abdullahi  Dauda  Belel or being committed in ensuring the  revitalisation of the Health effects delivery  in the state, and congratulated Dougirei  Community for having a brand new Health  Centre, explained that the  centre will operate Twenty  Four Hours  if completed.

In his remarks ,the Executive Chairman Primary  Health Care Development Agency Dr  Abdullahi Dauda Belel said  the project is  One of the  Federal Government in revitalising  health system  in Nigeria.

He  stated that the project is a joint collaboration between the  Local , State  and the  Federal Government and will provide  access to  Women  and children  of Dougirei area  at all the times, stressing that the centre will serve  for both medical and  Laboratory services.

Dr. Abdullahi  Dauda Belel  also  thanked the Governor  for giving  the Agency  a free hand to operate with out any hindrance  and assured that  the project will be completed  within the period of  Four Months.

He also said  the facility  will assist in addressing  health challenges  of the people of the area and urged the community  to support the project  for the betterment  of the area and assured that  the security of the  community  is well guaranteed .