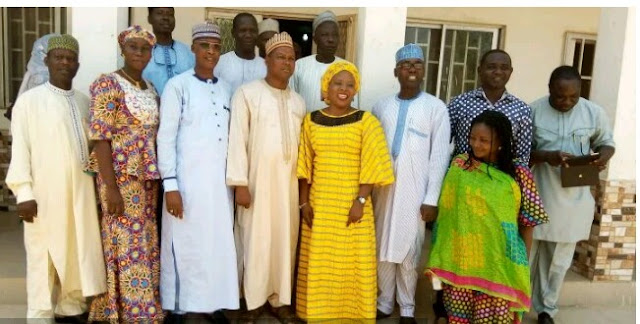 While inaugurating the committee,  Salisu charged them to be prudent as the forth realm of the estate to enlighten the general public on the political aspirants to make the right choices.

According to him it's enshrined in the 1999 Nigerian constitution as amended that the press is saddles with the responsibility of making the general public enlighten on who to choose as their leaders.

''The aim is to bring together aspirants  for various political offices to advertise themselves and prove to the world they get leadership qualities to represents them aheads 2019 general elections.

" We consider you worthy of this constitution job and I will not hesitate to remove anyone of you that is not meeting or derailing from the purpose of why this committee is formed, " Salisu Said.

The committee will be headed by Alhaji Shekarau Yerima as the Chairman while Tom Garba, Maria Albert Zira,Yunusa Abdullahi and Ishaka Dedan will serve as members, expecting them to Work from now to 2019.

On the other hand,  the National trustee incharge of Zone E of the NUJ, Mohammad Saidu enjoins them to do a proper Work of educating the public on who to vote and who to vote not.

Saidu called on all aspirants to seize the opportunity to come and advertise themselves.

The NAWOJ National secretary, Mrs Ladi Bala enjoins the committee to have an inclusive gender equality meetings to all aspirants in the State without being biase to Women.

The inaugurated Chairman, Alhaji Shekarau Yerima told the leadership of NUJ  that his committee will do all that it takes to have a successful meetings with all the political aspirants, assuring that the commitee will be fair to all aspirants.