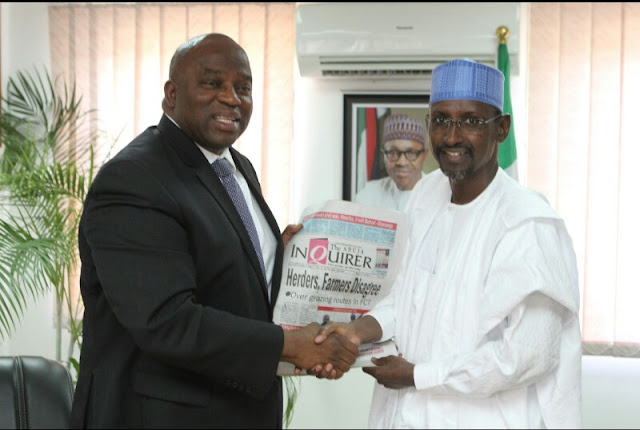 Publisher and Chief Executive Officer of The Abuja Inquirer newspaper, Mr. Dan Akpovwa, has commended the minister of the Federal Capital Territory, Malam Muhammad Bello for what he described as “uncommon transparency” in the day to day running of the administration.

Making the commendation when he led a delegation of his management team to the minister, Akpovwa specifically noted with delight the transparency exhibited in the disbursement of Area Council’s allocations.

In the words of the publisher, “I came with a delegation of my management team to specifically thank you for your uncommon transparency in the disbursement of Area Council’s allocations. It is not in our tradition to sing praises of government officials, but your style of running a public office is worthy of note.

He added, “Since you came on board as minister, we have witnessed the transparent manner in which the allocations to Area Councils are disbursed. “More significantly, we have also seen a systemic increase in the Area Council allocations. This is highly commendable and we want to identity with your administration,”

Mr. Akpovwa however, solicited for a more robust partnership between the media and the Federal Capital Territory Administration to give more publicity to some of the giant strides.

While responding, the FCT Minister, Malam Muhammad Bello, appreciated the visit, even as he noted that the task of running a mega city like Abuja should not be left in the hands of government alone.

Bello, who expressed regret over the vandalization of public facilities in the Federal Capital Territory called on media owners to assist government in the area of advocacy.

He specifically mentioned the under-utilization of pedestrian bridges and vandalization of man-hole covers and electrical cables across the Territory.

“I am very passionate about this city and in your paper, I see that passion. So that makes us partners in progress. For you to have been around in the last 14 years is great because we have seen a lot of papers go off. But you have continued to persevere. That’s a sign of progress and what we call incremental steady progress.

“More importantly, when we decided to start publicizing the Area Councils allocations, it was a deliberate decision that we are going to do it through your paper because your paper is domiciled here and is highly read within the territory.

“You are the eyes and ears of the wider community and as public officers, if we decide and agree to work, then we should work and when we make mistakes, we should be informed. That’s why we will continue to support you.  It’s a symbiotic relationship. We need to support you to support each other,” the FCT Minister said.