Home » News » NEWS: Governor Bindow Urges Communities in the state to embark on self help project.

NEWS: Governor Bindow Urges Communities in the state to embark on self help project.

Governor Muhammed Umar Jibrilla Bindow of Adamawa state has called on communities to embark on self help projects as the government cannot do everything for them. The Governor who was represented by the Commissioner for water resources Alh. Rufai Ahmed Abubakar made this remark while speaking at the maiden Gude Cultural and Development appeal fund in  Gella Mubi-South local government area. He said due to the lean  resources available to the government, it cannot be able to provide every community, hence the need for them to embark on self help projects. The representative of the Governor announce the donation of N 2 Million to the fund.
Earlier in his welcome address, the district head of Gude and patron of the association Alh. Sali Bello promised that the community will utilize the amount realised for the purpose intended.
Speaking at the occasion, the vice chancellor of Adamawa State University Mubi Professor Kaletapwa Farauta who was the Chairperson of the occasion urged the communities across the state to emulate the Gude district development and cultural association in giving the government a helping hand.
The chief launcher at the occasion Alh. Musa Garba, managing director Madugu hotels Ltd, Yola thanked the Gude District Cultural and Development Association for appointing him as the Chief launcher and asked them to ensure judicious use of the proceeds. He donated the sum of N 2Million to the fund.
The guest speaker at the occasion comrade Ahmad Ibrahim Sajoh called on youth to avoid drugs and political thuggery and to live a meaningful life. He said the Gude District Cultural and Development Association will look into the educational backwardness of the area and its poor health facilities.
The new executives of the association led by Alh. Ahmad Bazway, the former chairman of Mubi South local government area council was inaugurated. Over N 10 Million was realised during the Launching of the fund. 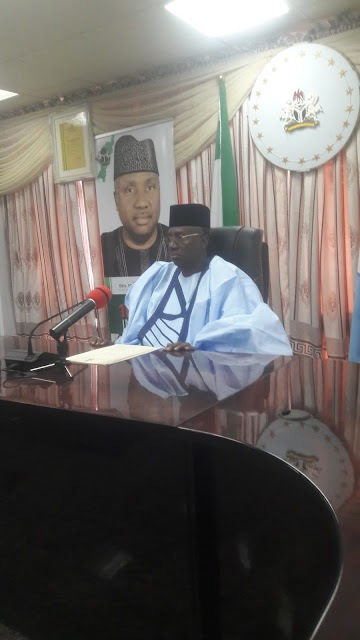