Home » News » NEWS:I will Empower the Vulnerable in our Society - New Zinariyan Jimeta

NEWS:I will Empower the Vulnerable in our Society - New Zinariyan Jimeta

The newly turbaned Zinariyan Jimeta and the Permanent secretary ,Ministry of Women Affairs in  Adamawa state, Hajiya Maisaratu Bellow said she have a vision of empowering Widows, Youths and the less privilege who are the most vulnerable in the society.

She said this during her turbaning ceremony in Yola amidst Joy and jubilation,with hundreds of well wishes cheering her as the only Woman turbaned with the rare title.

According to her ''Zinariyan"Jimeta is a unique and special ornament among all the valuables previous stones elsewhere, a tittle that means to regards her as the most valued and a unique Daughter of Jimeta District.

"You know generally women are vulnerable but widows are the most vulnerable, for a woman to survive on her own is not an easy task, I have being trying to see that the life of women have being touched by Government and their livelihood to improve.

"The present administration under the Leadership of Senator Muhammadu Umaru Jibrilla Bindow is working hard to see the life of women and their children is improve in the area of education, health and economically" She said.

She continue to say that the mandate of her Ministry is giving hope to Women, protect them from all form of violence, abuse, molestation and show them somebody somewhere else cares for them.She however revealed that the new feather is no doubt a booster in her dream to make sure women and Children are given a close attention especially those that are victims of abuse and insurgency.

While thanking the District Head of Jimeta, Alhaji Baba Paris for making her the only woman to be part of the traditional council of the District office, she assures him of her total loyalty and will give good advice that will bring progress in the council.

She added that Jimeta is a Metropolitan District Headquarters of Adamawa state, District Heads of all the Lamido Adamawa emirate and vows to uphold traditional title as a rare honour to be investiture with such envious title. 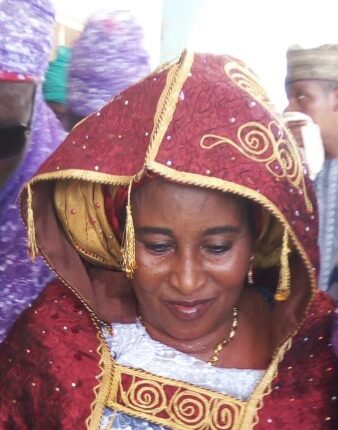