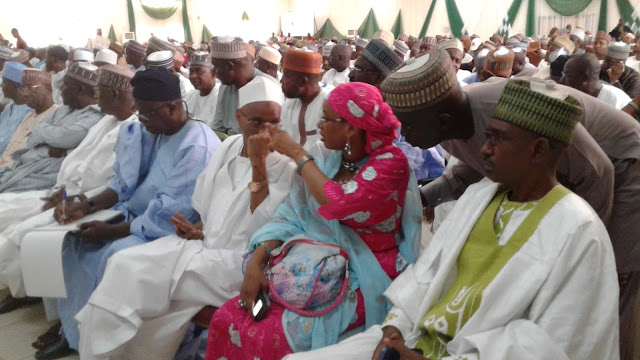 The  All Progressives  Congress  (APC ) in Adamawa State have assured it's members of the Free  and Fair elections  during the  forthcoming  party Congresses across the state.
Governor Senator  Muhammad Umar Jibrilla  stated this  while  addressing stakeholders and  supporters of the  party at the Banquet Hall of the Government House Yola.
Governor Bindow  disclosed that all the Twenty -Four  Progressives  Governors  have endorsed President  Muhammadu Buhari for the 2019 candidature of the party  and commended the  entire  members of the APC in the state for the support and  cooperation  giving to his administration  at all times .
Senator Jibrilla  explained that his government  have so far constructed about Two Hundred and Forty  Roads in Eighteen  out of  Twenty -One Local Government Areas of the  State  and promised to  provide  more  dividends of Democracy to the electorates.
While  enumerating some of the  remarkable  achievements  recorded by his government, the Governor  also said already his administration has  declared a state of emergency on Health and Educational  sectors with a view to improve the service delivery in the sectors.
He also  directed Leaders of the Party to conduct a Free and Fair Congresses in the " I want to states categorically  that  I don't have any candidate and I don't  support any candidate for that Congress " he emphasised.
In his remarks, the  Secretary of the Government of the Federation Barr. Boss Mustapha commended members of the APC in the state for their understanding and support to Governor Muhammad Umar Jibrilla  and President Muhammadu Buhari and urged  party members  to elect credible leaders during forthcoming congresses that can move  the party to victory at all times .
Also in  his good will message, the APC North East  Zonal Vice  Chairman  Comrade Mustapha  Salihu  called for  unity among  the members of the party and announced some of the guide lines as regards to the party Congresses at all levels, pointing out that the  Congresses  must be done at the party offices from wads to the local government  as option A4 Would be  adapted during the process and to be conducted  free and Fair.
Comrade Mustapha  Salihu along called on the stakeholders of the party  to put aside their differences  and work as a  team for the  continuous  success of the party .

Earlier, the  State Chairman of the APC  Alhaji  Ibrahim  Bilal  who was represented by  Mr. Samaila Thadawus  said for the past Four Years, APC has produced  leaders from President  down to Ward Councillors.
He said that  APC  as a party is aimed to  better the living  standard of the  electorates at the grassroots.
08:57
Adamawa Daily Reports
Email ThisBlogThis!Share to TwitterShare to Facebook