Home » News » NEWS:State Ministry of Women Affairs and Social Development Cautioned Women and  all to be Security Conscious

NEWS:State Ministry of Women Affairs and Social Development Cautioned Women and  all to be Security Conscious

A European Union Founded Programme and Implemented by United Nations Entity for Gender Eqality and Empowerment of Women ( UN Women) in Partnership with UNICEF, WANEP,  IPCR and Adamawa State Ministry of Women Affairs And Social Development has just concluded a 2 Day Training of Stakeholders on Community Dialogue for the Development of Gender- Sensitive Early Warning Indicators and Review of Peace Architectures for the State.

Mr.  Sunday Stephen the deputy Permanent Secretary,  Ministry of Women Affairs and Social Development delivered the welcome address on behalf of the Permanent Secretary of the Ministry Hajiya Maisaratu Bello. He assured the partners of the Ministry's readiness to render its support when the need arises. He had also emphasized on the need for Women and all to be security conscious as security is every bodies business.

Similarly,  GoodWill messages were delivered by the representatives of UN Women and WANEP/IPCR Respectively. Mrs Njare Karuru, the Programme Manager of UN Women in her Good Will said " we are here to produce a more inclusive Peace Architecture where women also contributes and participate in all ways to ensure that security is enhanced ". While on the other hand, Bijoue Birch of WANEP/IPCR said " our agenda is to create an environment for women to be active agents of peace and to empower them to seek and create environment for them to become active agents of peace ".

The participants were mentored on the Processes and Procedures for Developing Conflict Early Warning Indicators under which there are review of Indicators,  classification and thematic groupings of indicators as well as the review of intervening factors and Coping Mechanisms. More so, there was a session on Review of Peace Architecture and Response Mechanisms.

However, participants were grouped into five and were engaged in a vigorous task that will result in  the development and creation of the State operational structure of Peace Architecture, an operational Action Plan as well as an operational Organogram for a successful implementation of the programme.

However,  the Objectives of the 2day  training include;
1. to improve the understanding of conflict indicators and its roles in early warning,
2.  to  strengthen identified intervening factors and coping mechanisms peculiar to Adamawa State,
3.  to appreciate the concept of Peace Architecture and its impact to effective Early Warning and Early Response,
4.  to agree on Stakeholders functions and sustainability of a gender Sensitive Peace Architecture in Adamawa State. 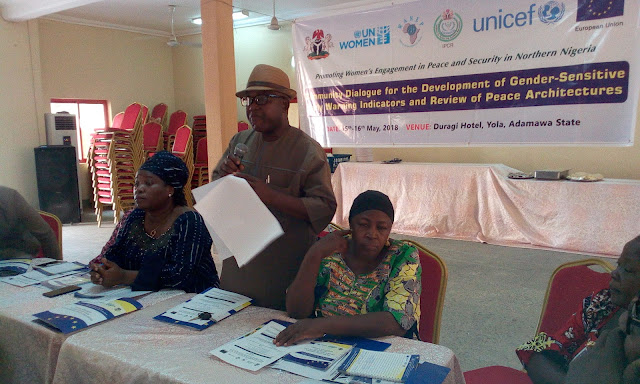 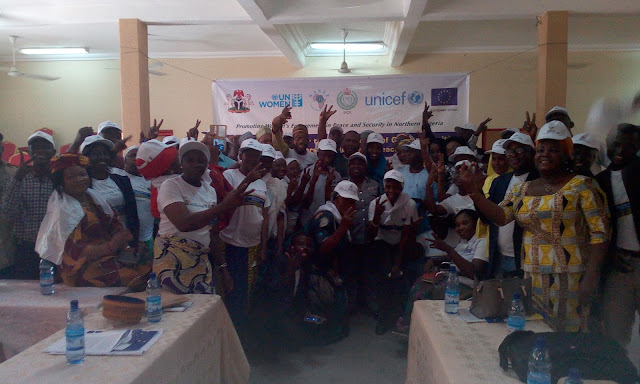