Adamawa Queens have lost points in the Nigeria Women Football League Match Day 6 after they suffered a 1-0 at the hands of Sunshine Queens of Akure.
The Yola based club who hosted their visitors at the Atiku Abubakar Stadium, Fufore was under intense pressure to win their home game having lost 2-0 in away match against Osun Babes of Osogbo in Match Day 5.

Adamawa Queens’ clash against the Akure based club is one of the toughest game they played this season. 5 minute in to the match, the visitors made a good move towards Adamawa Queens' defence line; and Ope Aiyeniberu played the ball off target.
The home team first attempt on goal came in the 11 minute when Okechukwu Alekiri took a free kick from about 35 metre spot from the goalie line to Chinyere George who positioned herself in the 18 yard box. George controlled the ball and shot on target but the captain of the visitors, Aiyeniberu cleared the ball.
Sunshine Queens edged Adamawa Queens in ball position which forced the later to play a defensive game.

Adamawa Queens had a setback in the 14 minute when its prolific defensive midfielder, Monica Sabo was injured and stretched out the field for proper treatment. The Queens' Head Coach, Baba Buba introduced Kanu Gift who played in the midfielder for the injured Sabo.

In the 26 minute, Carine Yoh of Sunshine Queens tried her luck with a powerful shot on target from Margret Ademulegun corner kick but the goaltender of the Yola based female club, Obidimma Nkiruka intercepted the ball.

Another chance came for Adamawa Queens in the 28 minute when Kanu Gift made a skilful dribble on two defenders of the visitors at the right flank corner and passed the ball to Okechukwu Alekiri who was in better position to score but played the ball over the bar.

In the 32 minute, the Centre Referee had blow against Adamawa Queens for foul committed by George Chinyere on Rofiat Imuran of Sunshine Queens at about 30 metres to the goal line. The defensive midfielder of Sunshine Queens, Carine Yoh played from a spot but it was off target.

In the 44 minute, the Centre Referee cautioned Sunshine Queens' midfielder, Bella Rose with yellow card for bad tackle on Adamawa Queens' captain, Nina Gilbert.
Adamawa Queens were able to hold Sunshine Queens to a goalless draw in the first half.
Second half of the game resumed; both team changed formation.

In the 55 minute, Sunshine Queens made a technical substitution. The team's First Assistant Coach, John Niyi introduced an attacker, Mercy Idoko for Bella Rose who played as central attacker in the match.

The visitors' newcomer proved to be prolific in the attacking line; she made her first attempt on goal in her second touch of the ball.

Adamawa Queens' attacker, Nwachukwu Oluchi got a through ball from the midfield in the 57 minute, controlled the ball, dribbled two defenders in the 18 yard box and attempted to slip in but dived in order to be awarded penalty. The CR cautioned her with yellow card for diving in the 18 yard box.

The Akure based female club launched a counter attack against Adamawa Queens in the 63 minute; Adamawa Queens defender made a good clearance and it was a corner kick for the visitors. Margret Ademulegun played from a spot to the 16 yard box of Adamawa Queens; Oyethelemhi Tina scored with a free header.

Having scored the long awaited goal, the visitors resorted to a delay tactics. In the 69 minute, the Centre Referee booked the central defender of Sunshine Queens, Oshoukola Wunmi with yellow card for delay to throw in.

In the 73 minute, the CR cautioned Sunshine Queens' Rofiat Imuran with yellow card for delay tactics.

Coach John Niyi of Sunshine Queens made another technical substitution in the 79 minute, he introduced midfielder, Precious Vincent for an attacker.
Adamawa Queens' tactician who wanted his team to score an equalizer, made his final change to strengthen his attacking line. He brought in Adeusi Alaba in place of Kanu Gift.

In the 83 minute, Adamawa Queens made a good move, Regina Omede dribbled two defenders and passed accurately to Nwadike Stella who was well positioned to score but shot off target.

Adamawa Queens morale became high and their attacks came from the flanks and centre. A controversial hand ball by the Sunshine Queens' player in the 18 yard box which was overlooked by the CR had generated tension in the match.

Hope for Adamawa Queens to score an equalizer was dashed in the 90 minute when Orgii Kelechi played from a spot;  Alaba who positioned herself in the 18 yard box made a good control but shot over the bar.

The game ended: Adamawa Queens 0-1 Sunshine Queens.
In a post-match exclusive press briefing with Destiny Sports, the First Assistant Coach of Sunshine Queens, John Niyi who led the technical crew of the team to encounter Adamawa Queens said that his team always play without regard to whether they are at home or away. Niyi lauded the performance of his players and added that they have played to instructions adding the officiating was fair.

However, the Head Coach of Adamawa Queens, Baba Buba was dismayed over the officiating. He blamed the referee for their defeat adding that the referee denied them what is due for his team in the match. Coach Baba lauded his players for a good performance and said that they have played to instructions.

Adamawa Queens next match is away against Nasarawa Amazons on 23rd May, 2018 . 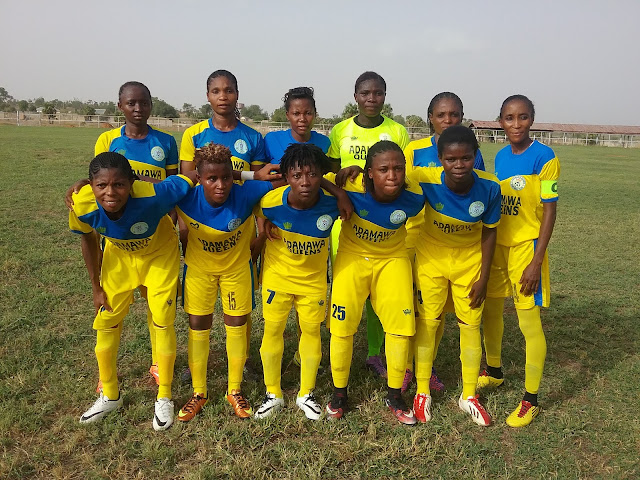 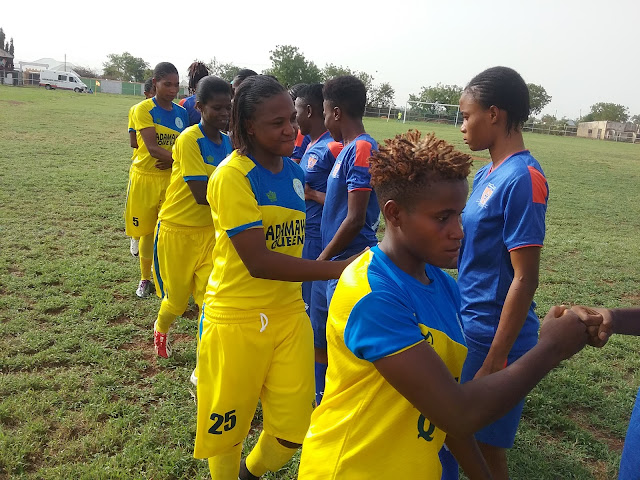