​The Chief of Air Staff was in yola the Adamawa State capital on an official visit to commission different projects which includes furnished transit accommodation comprising 2 bed room flat at the Air force base in yola. This is part of his commitment to enable the Air force have good accommodation .

The Commander 153 Base Services Group Yola, Air Commodore Anthony Ndace, in his welcome address stated that it was heart warming to note that the NAF leadership had made the welfare of personnel a priority, a development, which he noted had enhanced professionalism, commitment and optimum service delivery.

He also thanked the CAF for making them  his priority. He  expressed That's heart-warming for the provision of yet another set of facilities to them in Yola after some resent once.  He stated that the CAS has brought so much joy to them since his assumption in office.

In his remark , The Chief of the Air Staff (CAS), Air Marshal Sadique Abubakar, he insisted that for the Air force to give their best they most have the basic amenities in the base, they most have equipments.  In the last 2 years they have made provision of bell 415 helicopters,in addition they have brought 10 brand new training planes from Pakistan, they have also trained their men. This he said is to achieve power projection and power protection.

He also promise that the secondary school in the base will be expanded too this is to ensure good education for their children.

Finally he thanked President Mohammadu Buhari for supporting the Air force and also  thanked Governor Muhammad Umar Jibrilla Bindow for also supporting the Air force. He then held interactive sessions with the officers and Airmen/Airwomen in the operational theatre during which he appreciated their sacrifices and also urged them to remain highly professional.

The sessions also enabled him to receive direct feedbacks from the personnel and respond as necessary. The CAS led His Excellency, the Executive Governor of Adamawa State, who was represented by the Deputy Governor, His Excellency Honourable Martins Babale, and other dignitaries to commission the new ward in the hospital. Other projects across the collocated units at NAF Base Yola, all aimed at improving personnel welfare, were equally commissioned today. The projects include 2 blocks of 10 studio apartment for airmen/airwomen and 10 Single rooms Officers Quarters for officers.

While commissioning the projects, the Adamawa State Governor Mohammed Umar Jibrilla Bindow represented by his Deputy Engr, Matins Babale note the several developmental projects already witnessed at NAF Base Yola under the current NAF leadership he said, " We in Adamawa State are very proud of you, last year you came here to commission a gas plant and today you are back". He added that not only had the projects gone a long way in boosting personnel welfare but also contributing to overall development in the State. He therefore commended Air Marshal Abubakar for his apparent commitment, resilience and prudent use of resources. He also urged the personnel to make judicious use of the new facilities while announcing that Adamawa State would continue to support the NAF to ensure the achievement of its goals, including attainment of security in the Northeast.

He seized the opportunity to disclose that the State had secured the approval to build an airport at Mubi and that the airport would be collocated with the NAF Detachment in Mubi, to complement NAF efforts in the area.

In his remarks, the CAS stated that, as a way of realizing his vision for the NAF, the Service had been restructured for enhanced operational effectiveness. He further stated that necessary platforms and equipment were being acquired and reactivated while training was receiving optimum attention. He added that, in recognition of the importance of  human being, the welfare of personnel was also being considerably looked after, in line with the policy directive of President Buhari.

According to him, that was why resources has been expended in building additional residential accommodation and expanding the medical facilities for the frontline personnel in Yola. He also disclosed plans to expand the NAF secondary school in Yola to ensure that the wards of the personnel and members of the host community receive quality education. He then thanked President Buhari for the immense support being given to the NAF. In addition, he thanked the Adamawa State Governor and the people of Adamawa State for their support and hospitality.

He then promised that the NAF would continue to work with other security agencies in the State to enhance security in Adamawa State and environs. 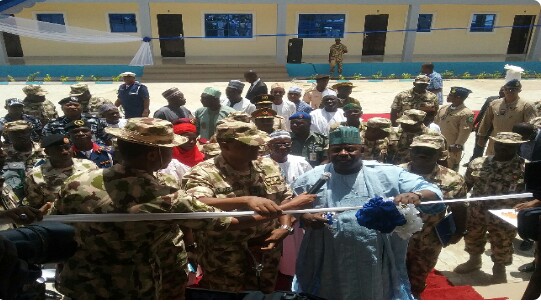