EDUCATION: State Government and Partners to Sponsor Students to India 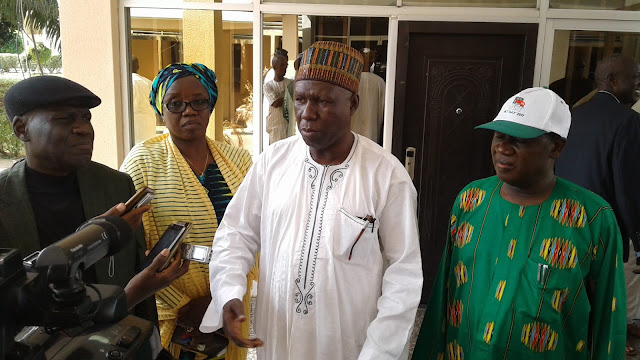 The Adamawa State Government in collaboration with Local Governments and other Development partners would  sponsor  Adamawa State  Students  to study in Universities in India where the  courses are  not available in Nigeria.
This was contened in a resolutions  reached during the 28th  Weekly  State Executive Council Meeting presided over by Governor Muhammad Umar Jibrilla at the Council Chambers of the Government House Yola.
Briefing  Journalists the  Honourable Commissioner Ministry of Information and Strategy Comrade Ahmad Ibrahim Sajoh along side Commissioners of  Education Mr  Julius  Kadala, permanent  Secretary Ministry of  Water Resources Hajiya Ladi Banu  and the Chairman of the State  Planning  Commission  Engr.Arin Lutu explained that the  State Government  would  contribute Forty per cent of the Cost implications.
According to Comrade Ahmad Sajoh, the Council had assigned Honourable Yayaji Mkjinyawa to over see the  affairs of the  Ministry of  Higher Education in addition to his  present Ministry of  Land and Survey.
The Council also approved  and ratified a waiver to post primary schools  management board to recruit  about 1,514 professional  Teachers., explaining that the recruitment would be  transparent, adding that the  committee would work in accordance with the Civil service rules.

The  Information Commissioner also said that the EXCO had approved the 2018 Amirul - Hajj team headed by Alhaji Dahiru Bobbo, while  Alhaji  AbdurRahman  Adamu, Alhaji Nuhu Wakili  Ba Wandu, His Royal Highness Amna Shelleng Alhaji Abdullahi Isa Dasong and  Alhaji Tukur Mua'zu  would  serve as  members .
On the provision of portable drinking Water  in  the state, the  Permanent Secretary of the  Ministry of  Water Resources  Hajiya Ladi Banu  explained that the Adamawa State Government  in collaboration with European  Union would  under go  for the provision of  portable drinking Water to the people of Adamawa State, pointing  that about One  Hundred and  Six Million Naira had been approved  as counterpart funding of the project  across the state.
The  Chairman of the State  Planning Commission Engr.Arin Lutu explained that the  Council had also granted approval to the College  of Agriculture Ganye to recruits some staff to certain Departments of the College in order for the  Institution get accreditation