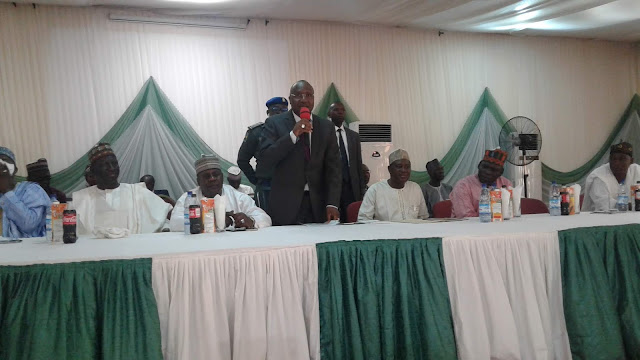 Teachers in Adamawa State  would  now serve  for the period of  Forty Years  in Teaching  Profession.
Governor Muhammad Umar Jibrilla  stated this during  an interactive meeting with members of All  Nigerian Confederation  of Principals of Secondary Schools (ANCOPSS) in the State  Attorney the Banquet Hall of the Government House Yola recently.
Governor  Jibrilla  said that in view of the importance  attached to Education, his administration has  declared  state of emergency on the sector.
"Apart from providing basic physical infrastructure in the state, our government  decided to give Education  a top priority, because  the  sector remain the bedrock of any socital development." He said
On the welfare of Teachers the  Governor  assured his government would  pay attention on their  welfare by providing them with Car Loans and other conditions of service by ensuring that Teachers are being graded up to GradeLevel Seventeen
While in service. "It is mandatory  on me now to write to the  State  House of Assembly to legislate on the Forty Years of service to Teaching  Profession in the  State because of the problems that we made on ground the Education system was in total decayed
He also explained that Government will revive Teacher's Colleges in the state, pointing out that  Fifty percent of the Government expenditure would be  expended on Education if given mandate for the second term.
The Governor also promised to Sponsors ANCOPSS  Conference scheduled to  hold in Kenya come  September this yea  and solicited  for the  support and cooperation of all Teachers  in order to move Adamawa State  forward.
Earlier in his remarks the Honourable Commissioner Ministry of  Education  Mr Julius Kadala said that the  main purpose of the  interactive  meeting with the  key stakeholders  in the sector is to rubbed  minds and develop strategies that will take the sector to the next level.
The  Commissioner  appreciated the efforts of the present administration  under Governor Muhammad Umar Jibrilla for giving  Education  sector  the desired attention.
In their separate  messages, the State  Chairmen of NLC Comrade Dauda Maina, NUT Comrade Rodney Nathan  and State President of ANCOPSS  Ahmad Adoura have commended Governor Muhammad Umar Jibrilla for providing an enabling environment for both teachers and students in all the schools in the state and promised their  total  loyalty and  support to the government and assured that Teachers vintage Adamawa State would  continue to support the Government  at all times.
11:28
Adamawa Daily Reports
Email ThisBlogThis!Share to TwitterShare to Facebook