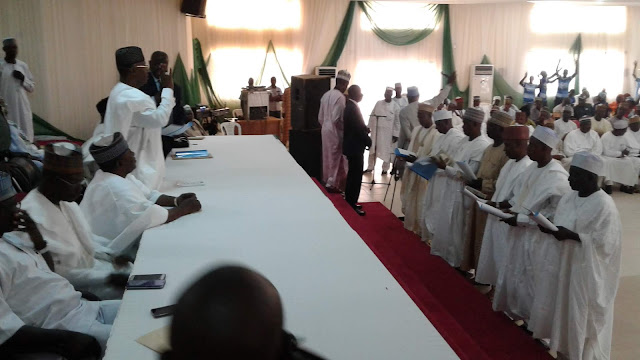 Public office holders  have been reminded to always abide by the Oath of Office taken while  discharging their official responsibilities.
Governor Muhammad Umar Jibrilla who gave the charge while presiding over the swearing  in ceremony of Eight  Additional Special Advisers into his administration at the Banquet Hall of the Government House Yola.
While  congratulating the newly sworn in  special  advisers on their  appointments, the  Governor  explained that public office is a public trust and urged the  appointees  to be  prudence and accountable in the discharge of  their duties.
He also  called on the political  appointees to work assiduously for the progress  and Development of Adamawa State .
The Governor also  explained that  his government has constructed and completed  about  Four Hundred  Roads across the state as well as Renovation of some selected  Hospitals  in Mubi, Yola  Specialist Hospital, Numan and  Ganye General Hospitals  in addition to  some selected  Schools  across the state.
He also commended  President Muhammadu Buhari for awarding the construction of Mayo  Belwa -- Jada -- Ganye -- Toungo Road .

Governor  Jibrilla however urged Special Advisers to always give  useful  advises in order to provide for  the electorates Dividends of Democracy.
Those  sworn in  includes;  Abubakar  Hamman Joda  Jada ,Abdulkadir Mai from Shelleng, Mahmud Modibbo Umar from Yola South, Alhaji  Sani Gunda from Guyuk, Bello Ardo from Ganye,Hussaini Usman from Toungo,  Hammadu Musa from Hong, and Ibrahim  Ahmadi from Mayo  Belwa  Local Government Areas.
Responding on behalf of the Special Advisers, Alhaji Abdulkadir  Mai thanked Governor Muhammad Umar Jibrilla  for finding  them  worthy to serve as  Special  Advisers and promised to be loyal and  to contribute their quota towards the development of Adamawa State.
The Oath of Office  was  administered by the Solicitor General and Permanent secretary Ministry of Justice Barrister Suleiman Muhammed.
05:50
Adamawa Daily Reports
Email ThisBlogThis!Share to TwitterShare to Facebook