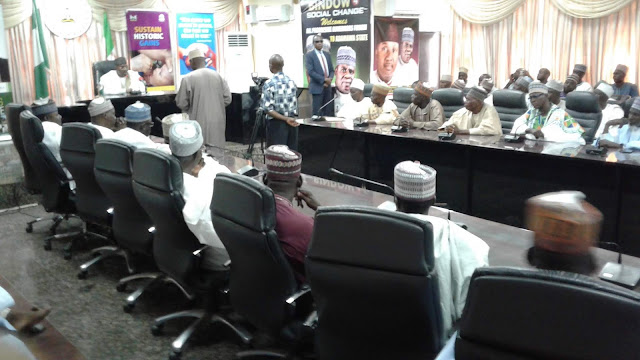 Michika  Community  have assured Governor Muhammad Umar Jibrilla of  their total loyalty and support to his administration.
The  Community revealed  this while on a  thank you visit to the Governor at Government House Yola recently.
An Eldern -statesman of the community Mr. Sini  Kwabe  who led the delegation have  told Governor Muhammad Jibrilla  that they were at Government House to thank the Governor for approving the appointment of Mr. Gida Zakawa  as the new District Head of Michika as well as appointing  sons and Daughters of the community  into key position in his administration do assured that  they will  continue to support the Government at all times.
While  responding, Governor Muhammad Umar Jibrilla thanked  them delegation for the visit  and assured that his government  is determined to serve the people of Adamawa State.
The Governor also  called on the  Michika Community  to always  live in peace and harmony with one another  in order to benefit from the  developmental strides by his  administration in the area .
05:53
Adamawa Daily Reports
Email ThisBlogThis!Share to TwitterShare to Facebook