Home » News » NEWS:Gov. Bindow Reassured that APC will Continue in the State

NEWS:Gov. Bindow Reassured that APC will Continue in the State

Governor Muhammad  Umar Jibrilla appreciated Members of the  All  Progressives Congress  (APC ) in Adamawa State  for the continuous  support and cooperation  given to his administration.

The Governor stated this while addressing a mammoth crowd  and loyalist of the party  who converged at the first  Gate of the Government House to show their solidarity to the  Governor  for fulfilling his electioneering campaigns  promises to the  electorates  Adamawa State.

He reassured that Adamawa State will continue to  remains an APC  state , explaining that  President Muhammadu Buhari and APC  will  win Hundred  per cent in the future elections in the state.

The Governor also called on the  entire people of  the state  to join  hands for the overall progress and Development of the state. He  reassured that  his Government  will continue to provide democracy dividends to the electorates of Adamawa State at all times.

In his speech, the State Chairman of the All Progressives Congress, Alhaji  Ibrahim Bilal thanked Governor Muhammad Umar Jibrilla and the entire party  supporters for the support being given to  the party  Executives, stressing that the  party had just concluded it's Local Government  tour in order to  appreciate Members of the party for the mandates bestored on the  EXCO  and promised to be fair and  just to all its members.

He also  assured Governor Muhammad Jibrilla  that  2019 election will be  a victorious to the  Governor and to the party  in Adamawa State. 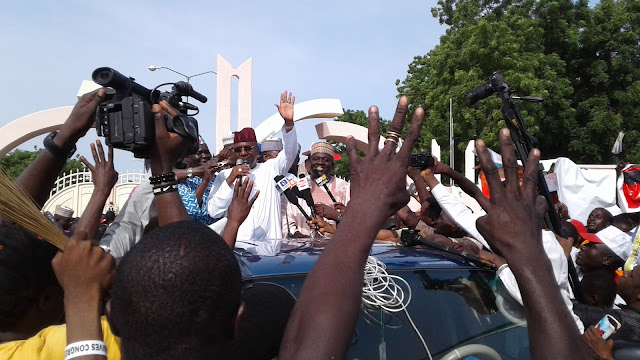