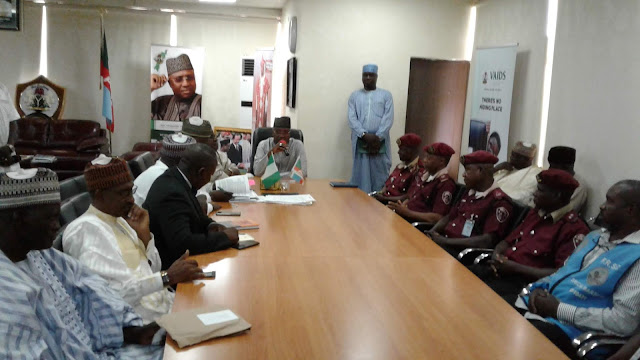 By Yunusa Abdullahi
Governor Muhammad Umar Jibrilla has been commended for providing  Roads infrastructure  to the people of Adamawa State.
The  newly posted sector  commander of the FRSC  in the state  Alhassan  Hussaini made the commendation during  a courtesy visit to Governor Muhammad Jibrilla  at Government House Yola recently.
The  Corp commander of the FRSC said with the  construction of Roads by the present Administration under Governor Muhammad Umar Jibrilla road accidents have been reduced drastically in the state," The level of development in the state is so impressive, and I feel if we didn't put in some of  our observation  in order to make these Roads better  then we are not doing Justice to  this giant strides you have made  so far " he emphasised.
According to Alhassan Hussaini Muhammad it is the responsibility of the  FRSC  to arrest  road  accident  before it happens .
While  soliciting the support of the state  Government in the provision of Roads signs in the state, the Corp Commander deemed it necessary  for the motorists  to know the importance of  road  signs.
He also  appealed to the state Government to establish Road  Traffic  Management Agency  as established in  most  states of the Federation as well as  to create additional Vehicle Driver's Licence unit in Local Government Areas.
In his remarks , the  state  Attorney General and Commissioner for Justice Barrister Bala Silas Sanga said the  office of the  state Attorney General is ever ready for the implementation of  Traffic Laws in the Adamawa State.
While responding, Governor Muhammad Umar Jibrilla assured the newly  posted sector commander of the FRSC in the state of the state  Government  support and cooperation at all times in order to compliment Government gesture for the FRSC.
07:33
Adamawa Daily Reports
Email ThisBlogThis!Share to TwitterShare to Facebook