Efforts of the FCT Minister, Malam Muhammad Musa Bello, to stem the activities of cable vandals yielded results recently when operatives of the Nigeria Security and Civil Defence Corps (NSCDC) caught three vandals who have been responsible for most of the darkeness being experienced in Abuja City streets and roads. The Corps has also vowed to hunt down other members of the gang who escaped arrest during the operation.

Luck, ran out on the three suspected armoured cable vandals along the Goodluck Ebele Jonathan way in the Federal Capital Territory (FCT) as officers of the Nigeria Security Civil Defence Corps (NSCDC) swooped on them while on their nefarious operation. The hoodlums were pillaging the armoured cables that supply light to west end of the Goodluck Ebele Jonathan Express Road, now under construction.

The vandals, Adams Teri, 36, from Michika in Adamawa state, Sani Musa, 25, from Birnin Magaji in Zamfara State and Israel Sati, 25, from Jaba in Kaduna state were caught in the act in the early hours of Monday, 27th August, 2018.

Parading the suspects to newsmen in Abuja, Commandant, FCT Command, NSCDC, Mr. Patrick Ukpan said officers of his command were alerted of the activities of the suspects three weeks before and have been patrolling the area with the aim of apprehending them, adding that following a tip-off around 12 midnight, the suspects were caught by plain clothes security operatives.

“We started monitoring their activities after an alert three weeks ago. A patrol team was deployed to that axis. Severally they we seen but escaped on sighting our men. But they were not so lucky this time. Our plain clothes operatives sighted about eight of them, chased after them and succeeded in apprehending three of them who we have paraded here with the aluminium cables with them”.

Ukpan stressed that the suspects were helping security operatives in an on-going investigation to apprehend the ring leaders of the vandals, adding that security was being tightened in the various blind spots observed.

He said, “We are investigating further because they are not working alone. All involved in the dastardly act will be prosecuted. After the investigation the suspects will be charged to court and if found guilty, will face imprisonment terms ranging from 21 years to life. In the meantime we are increasing patrol along blind spots on roads in the FCT”.

“All over the world security operatives rely on information from members of the public. So we are appealing to residents that whenever they observe any act they are not comfortable with and whenever they have doubts they should contact us. We have devised various means of checking the activities of these vandals, one of which is phone numbers that could be called for prompt response. Our hotline is 08054747755”, he said.

In separate interviews, the three suspects confessed to the crime and said they were paid one thousand five hundred Naira per metre upon reaching the armoured cables. They claimed that they were only paid to locate the cables and were not told what would happen afterward. Items retrieved from the suspects include diggers, shovels and several rolls of aluminium cables. 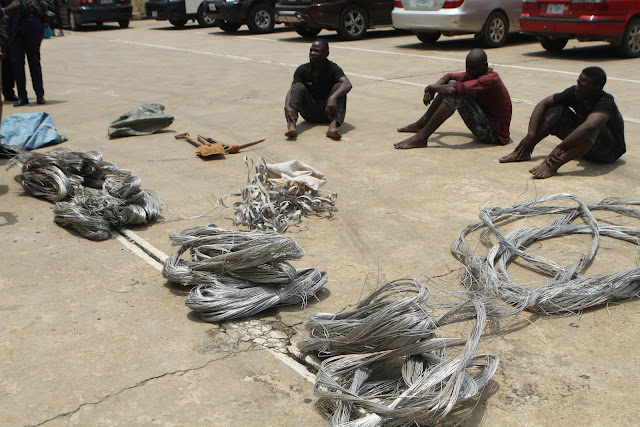