The British Prime Minister, Theresa May, arrived Abuja early this afternoon as part of her tour of the three African countries of South Africa, Nigeria and Kenya. The Prime Minister, on arrival, from South Africa, was conferred with an honorary citizenship of the City of Abuja by the Honourable Minister, Federal Capital Territory (FCT), Malam Muhammad Musa Bello.

Making the presentation of the key to the City of Abuja to Prime Minister May, the FCT Minister conveyed the goodwill and esteemed regards of the government and people of Nigeria to a delighted May.  The brief ceremony was watched by the Nigerian Minister of State, Foreign Affairs, Hon.  Khadija Ibrahim, who received the Prime Minister upon arrival, on behalf of Nigerian President, Muhammadu Buhari as well as other top officials of the Foreign Affairs Ministry.

Travelling aboard a British Royal Airforce Boeing 788, the Prime Minister’s flight touched down on the Presidential Wing of the Dr. Nnamdi Azikiwe International Airport, Abuja, by exactly 11.51 am, Nigeria time.

The visit which is her first since assuming office is expected to be used to sign security and defence agreements with President Muhammadu Buhari, which were initiated during the last meeting of the Commonwealth Heads of Government Meeting in London, last April.

The visit comes against the background of Brexit negotiations with experts speculating that May will seek a more robust investment opportunities for her country in African economies.

Theresa May is expected to leave Abuja for Lagos where her central message during her brief stay in Nigeria’s commercial capital is expected to focus on a renewed efforts at ending human slavery and immigration.

The Prime Minister is also scheduled to visit leave Nigeria for Kenya at the conclusion of her Lagos schedule. 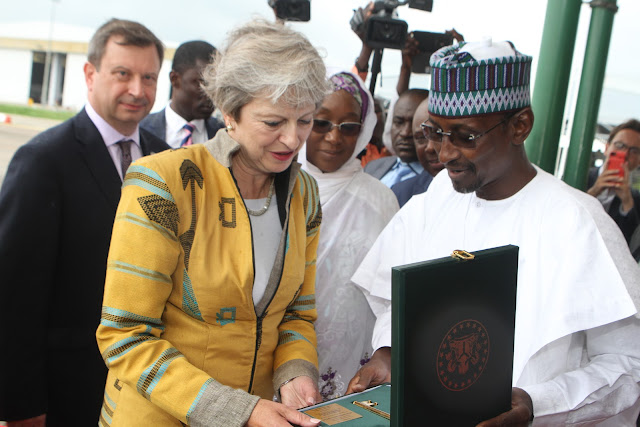 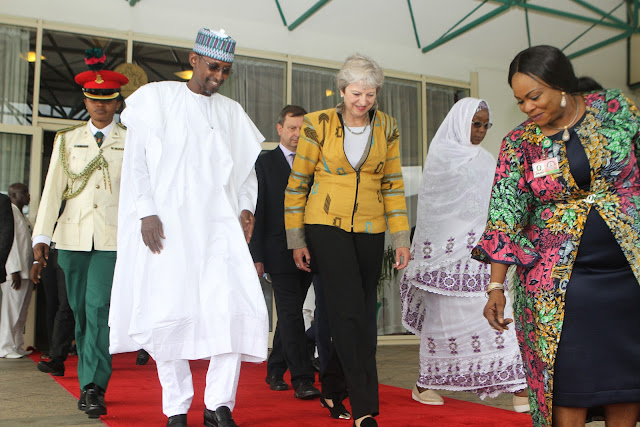