According to him, the two new Commissioners are to replace Hon. Yayaji Mijinyawa of Ministry of Land and Survey and Hon. Umar Daware of commence and industry who had willingly resigned.

He stressed that their resignation is never connected to any form of polical rancour or misunderstanding but to pursue their political career.
While extolling the loyalty and support they contributed to his government, Gov Bindow wish them well in their future endeavors.

The newly sworn in Commissioners,Usman Hammawa Tukur Daware from Fufore LGA and Iliyasu Bello from Yola North are to fill in the vacant positions respectively.

The Hon. Commissioner of Justice, BSD Sanga administered the oath of office to the duo commissioners at the banquet hall Yola amidst hundreds of supporter where the sweared to be allegiance to the constitution of the federal Republic of Nigeria.

In their responses, they promised to be loyal and support the political dream of Gov. Jibrilla that is tirelessly working hard to make Adamawa a progressive state in all phares of economy. 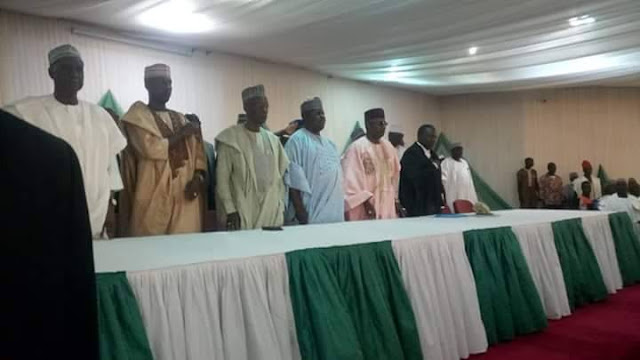