The construction of one hundred and twelve kilometers Mayo Belwa to Toungo road have been flagged off.

Speaking during the ceremony held along Jada road, state Minister of Works, Alhaji Mustafa Baba Shehuwi said the award of the contract followed the determination of President Mohammadu Buhari to stimulate economic growth and development.The Minister explained that due to importance of the road, the Federal Executive Council in June twenty eighteen approved the construction of the road to among other things reduce hardship been experienced by other road users.

In a remark, Secretary to Government of the federation, said the road have been abandoned since nineteen ninety six and urged the people to give President Mohammadu Buhari all the needed support to enable him complete the road project.

Also speaking, Governor Muhammad Umaru Jibrilla stressed that the commencement of work is a fulfilment of President Buhari's campaign promise to people of the area.
While calling on people of the area to give the construction company all the needed support, Governor Jibrilla disclosed that the construction of Tola to Binyeri as well as Jada township roads will commence by October this year.

He appreciated other ongoing federal roads construction to include Jamtari to Taraba, and expressed optimistic that Jabbi Lamba to Belel road will also commence soon.

Member representing Mayo Belwa, Jada Ganye Toungo in the House of Representative, Alhaji Abdulrahman Namdas, said the dilapidated state of the road has led to the loss of lives from accidents and described the renewed effort to construct the road as provision of divident of democracy.

Gangwari Ganye, Alhaji Umaru Adamu Sanda extolled the determination of President Buhari describing it as a legacy.He assured that the construction of the road will bring relief to those plying the road.

Managing Director of the Company handling the project, Traicta Construction company, Eli Hayat appreciated the award to the contract to his company and assured that it will live up to the expectations of the people. 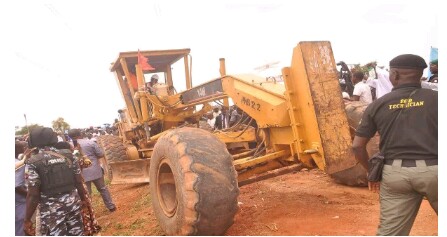