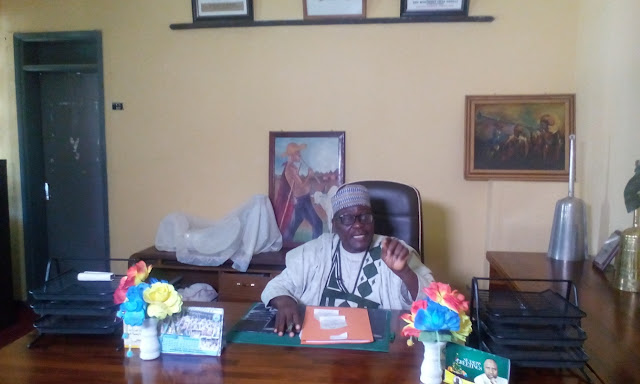 Lagos State Base Media Outlet JUST MEDIA were in Adamawa State within the week to visit the Ministry of Culture and Tourism and also to visit Tourist sites within the State. Justmedia is a yearly publication of integrated Tvproduction, Documentary and Radio Programms. They are visiting north-east for the first time. So far,  they have covered the western and eastern parts of the country and have produced publications  about these parts of the states in terms of their cultural heritage.  Justmedia, has its background on the need for Nigerians to showcase its rich cultural heritage as most recent generation are at the technological era, and the need to persevere and bring back our culture for generations to come was the idea that led the crew up north. Before coming to Yola the Adamawa State capital, they were in Taraba on a  similar visit.

During their visit, the Honorable Commissioner Culture and Tourism, Nathan Tawaliu Magaji gave them a warm reception and they asked if there were any historical sites in the state or cultural attractions.  In his response he said Adamawa has a lot of historical and cultual sites in the state, and festivals as well.

As far as Tourism attraction  is concerned the State, the Hon. Commissioner said plans are on the way to make the State Amusement Park an exotic recreational center, as lions, elephants and other exotic animals will soon be added to the amusement park.

He further said that the recently renovated Open Air Theatre has not only provided an entertainment arena,  but  has also  provided jobs for 120 talented youths. He attributed this success to the present administration and its efforts to see that youths are gainfully employed.