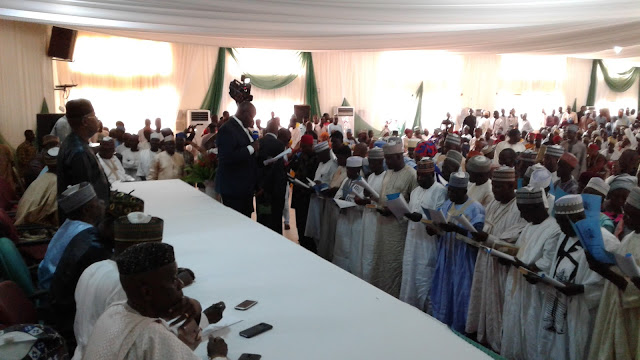 Governor Muhammad  Umaru Jibrilla has  presided over the swearing ceremony of Five  Additional Special Advisers and Fifty Development Area Administrators into  office  with a  call to  abide by the Oath of Office taken. Speaking at the  ceremony held at  Banquet Hall of the Government House Yola recently, Governor Muhammad Jibrilla said  Transparency and Accountability are the cardinal principles of his administration and charged the appointees to be prudence and accountable while discharging their official responsibilities.


The Governor also  maintained  that  public office is a public trust, reminding  them that they would be  accountable of  their stewardship before Almighty. While  soliciting for the support of the  stakeholders and  supporters of the All Progressives Congress  APC in the state to continue to support  President Muhammadu Buhari and  other rightful  aspirants during the  forthcoming party primaries, he also  called on the Adamawa  citizens  to tolerate one another for the progerss and development of the state  and country at large.


Those  sworn in as Special Advisers includes ; Muhammad Alfa  Raji from  Girei  Local Government Areas, Mrs Rebecca  Samuel from Gombi Local Government, Chief  Cyprain  Chukuma representing Igbo  Community, Mr. Sule  Magumya from Demsa and Muhammad  Sa'ad from Fufore Local Government Areas  respectively. Responding on behalf of the Special Advisers  Mr. Sule  Magumya  and Mr. Adamu  Watu on behalf of the  Development Area Administrators have thanked Governor Muhammad Umar Jibrilla  for finding them worthy to serve in his government  and promised to  work  hand in hand with the  members of the state  House of Assembly for the overall development of Adamawa State, assuring that  their collective responsibility is to  ensure that Governor Muhammad Umar Jibrilla return to power comes 2019.


The  Oath of Office was administered by the Solicitor General and Permanent secretary Ministry of Justice Barrister Suleiman Muhammed.
15:23
Adamawa Daily Reports
News
Email ThisBlogThis!Share to TwitterShare to Facebook