NEWS : European Union to Partner With Adamawa State Government In Areas of Development and Consolidation.

The  European  Union is to Partner With the Adamawa State Government in the Areas of  Development and Consolidation of Democracy in Nigeria.

The European Union Ambassador to Nigeria and  head of  E U  Delegation to Nigeria and  the Economic Country for West  African States  Ambassador  Katil  Karlsen who stated this when he led a  team of  delegation on a  courtesy visit to Governor Muhammad Umar Jibrilla  recently.

Ambassador  Katil said that  his coming to  Adamawa State  Is a very significant and long team development, cooperation  and partnership  between  the  European Union  and Adamawa State Government  in the Areas of consolidation and promotion of  Democracy.

While  congratulating Governor Muhammad Umar Jibrilla over the  just concluded APC  Governorship primaries conducted  free  and Fair in the state. , stressing that the  delegation will  also meet  stakeholders  in Electoral matters and to discuss  political issues .

The Governor also said that Adamawa State Is calm and stable ,he commended President Muhammadu Buhari for his giant strides in maintaining peace and security in the North East as well as fighting insurgency .

He however assured the  European Union  delegation  that  the present Government  will continue to support the  Union in order to actualize  it's laudable programmes and  objectives in the state. 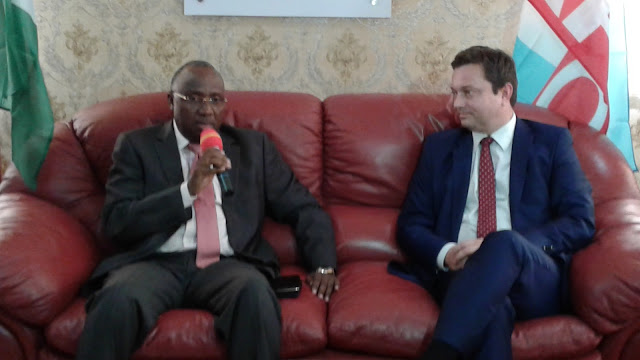