The  Forum of Commissions, Boards and Parastatals declared their  total loyalty and support to  Governor Muhammad Umar Jibrilla as  their sole  Governorship candidate  comes 2019.

The  SpokesPersons of the Forum Hamadu Durkwa, Professor Johnson  Pongri and Dr. P P Power who stated this during an meeting with  Governor Muhammad Umar Jibrilla at Government House Yola recently said  the objectives of the meeting are  to seek  for a catalytic role in returning Governor Muhammad Umar Jibrilla to power to complete his second tenure in 2019 and to create the  requisite platform for efficient  synergies among Adamawa State Government ,MDA's so as to ensure the  deepening and implementation of government policies and programmes.

They  explained that the  forum have the capacity and remarkable objectives  to inspire, raise hope and rally support for Senator Muhammad Umar Jibrilla in their respective  local government areas,wards and polling units.

Members of the  Forum also  commended the Governor  for his developmental strides by transforming Adamawa State with Roads infrastructure, provision of Health care delivery, Quality and sound Education as well as Water supply.

Responding, Governor Muhammad Umar Jibrilla had assured that  his administration is determined to provide social amenities to the  door steps of the masses of Adamawa State at the  grassroots.

He explained that very soon government will clear  all the outstanding salary arrears owed by the Local Government Staff, Primary Health Care workers, as well as  payment of  scholarship to  Adamawa  students.

The Governor also  called on the people of Adamawa State  to continue to support the  present administration in order to fulfil  his electioneering campaigns promises made.

He however stated that  the Principal cardinal principles of his administration is based on Transparency, Prudence and Accountability. 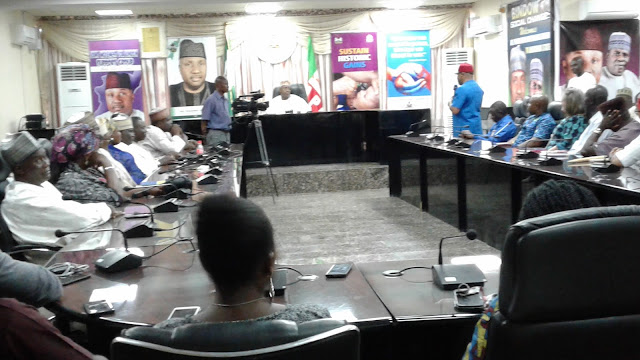